German POW Eberhard Wendler, a British farm worker, and two more Germans; they were kept as slaves for over two years until the British people protested. Thanks to a donation by a generous European comrade (of course, it was once again a European, NOT an American… 🙁 ) my site and eight others are now back.

I wish you all who supported my work a great 2017.
.
I predicted after the mass gropings by mudlims of German women in Cologne on New Year’s Eve exactly one year ago that 2016 would be a year of awakening, and it was.
.
Then came Brexit, Donald Trump and the rise of the AfD in Germany.
.
And 2017 the Great Awakening will continue!

A German comrade wrote me today that the first duty of a true political leader is to create and promote healthy values.

True, but only a new religion can do this, not politicians, and certainlz not a Donld Trump totally tied in with the Jews.

This is the year for a new Aryan religion, Virtus, and this year it arises. ……German “slaves” helped save Britain after WII; were then liberated 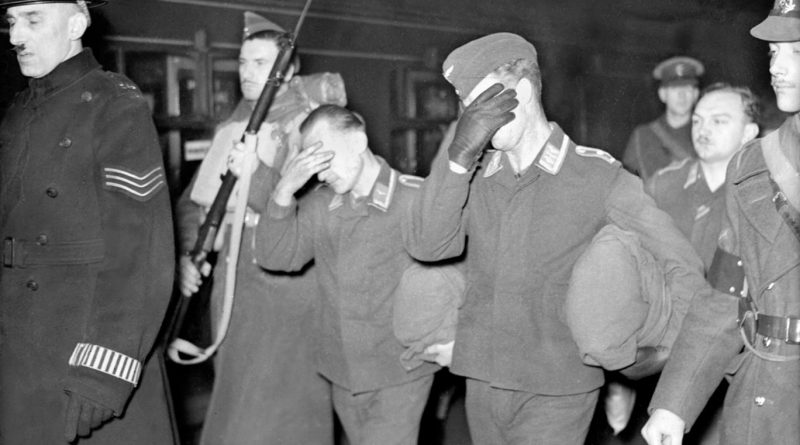 Enslavement of Prisoners of War is a violation of the Geneva Convention. – Article. 75

The educational mantra would have us believe that slavery was abolished throughout the British Empire in 1833. This is what British students are taught; why would they believe otherwise?

How then does one explain this? In a report published in The Chicago Tribune (August 24, 1946), one of America’s greatest war correspondents, John Thompson, reported:

“Great Britain in August 1946, 15 months after the war’s end, according to the International Red Cross, had 460,000 German prisoners of war slaving for her.”

German prisoners arriving from Europe and the US reached 400,000.

Given widespread censorship no blame is attached to post-war generations for their being blithely unaware of the massive human slavery sanctioned by Britain’s unelected plutocracy during World War II.

In 1946, Britons on rations were suffering the dreadful aftermath of Winston Churchill’s calamitous war. It is easily imagined that their having been press-programmed to blame Germany for their wretchedness there would be little sympathy for the defeated foe anyway. In fact, ordinary British people got on very well with German prisoners of war in their communities.

Today, thanks to the controlled mainstream media losing its grip on news dissemination we can look back on the period with a less jaundiced eye. How many know that it was the British public who revolted against their regime’s use of prisoner of war slavery?

In the late 1940s Britons were deeply ashamed and offended by their government profiting by over $250,000,000 each year from German slave labour. The Westminster regime was hiring prisoners of war out at up to $20 a week, and yet paying the slaves up to 20 cents a day. The prisoners were never given cash but provided with credits instead.

In March 1946, 140,000 prisoners-of-war were working on farms, which earned the British government $14 a week per prisoner, 24,000 on housing and bomb damage projects, 22,000 on the railways; others in odd jobs or waiting on GI brides awaiting shipment to America.

In Britain, among other public projects, German prisoners of war were forced to build in Kensington Gardens, a British victory celebration camp to house 24,000 Empire troops who marched in a four mile column to celebrate the Victory Day Parade. One foreman remarked, “I guess the Jerries are preparing to celebrate their own downfall. It does seem as though it is laying it on a bit thick.”

The London office of the Chicago Tribune Press Service on August 27, 1946 reported:

Such were the desperate straits of the German prisoners-of-war that an increasing number of them were escaping from British slave camps and they were doing so assisted by British civilians. “Accounts of the chases by Military Police are reminiscent of pre-Civil War pursuits by fleeing Negro fugitives.”

The bonds between ordinary Britons and Germans endured for many years after the war. One German slave labourer was not alone in referring to the farmer and his wife for whom he worked as ‘my English parents’.

Most Britons were in favour of allowing Britain’s hundreds of thousands of slaves to return to their German homelands. There was hardly a word of dissent when a journalist pleaded:

If we must have foreign labour to make up our shortfall let it be free labour… forced labour is intolerable.”

Little known is that it was German prisoners of war who were pivotal in rescuing Britain and the British people from disaster two years after the war had ended. During February 1947 the worst weather conditions on record brought the United Kingdom to a stop.

The British Minister of Fuel and Power conceded that he could not guarantee electricity or gas supplies beyond another week. Deep snowdrifts had paralysed the railways and roads. Coal, the nation’s primary power resource, was no longer reaching power stations, gasworks, factories and homes.

In order that the roads and railways be cleared thousands of British workers worked shoulder-to-shoulder with equal numbers of German prisoners of war. The Independent newspaper says:

Though the role of the prisoners was played down at the time and has never been officially recognized, without their contribution it is unclear how the nation could have avoided disaster.

The newspaper went on to say: ‘Doubtless, Britain would have survived somehow but where else could it have found 400,000 strong and reasonably willing workers for a shilling (5 U.S Cents) a day.’ Let us be fair; it was the British people, not William Wilberforce in 1833, who finally destroyed slavery in the United Kingdom.