This is his page on the European Knights Project

A mate of mine went to Auschwitz (not to be confused with Ipswich as he does have a shitty satnav) and came back doubting the official narrative so I decided to do a bit of research.

And this is what I discovered. (sadly what you are about to read could get me jailed in over 50 countries world wide. Truth is illegal in a lot of places…. And I am NOT talking about Saudi Arabia or North Korea, but EUROPE!)

So, why have we been conned? It’s a question I have been asking a lot lately.

Could it be to control people’s voting habits, and in turn keep certain political parties in power, and in the money.

Is it being done in a manner so we feel sympathy towards the people that control our money supply, run our banks and media?

So people are socially conditioned to hating people like me? Recall whenever a patriot is referred to as a  Nazi, an image of shrunken heads and skin lampshades immediately pops up.

And there was Ilse Koch. 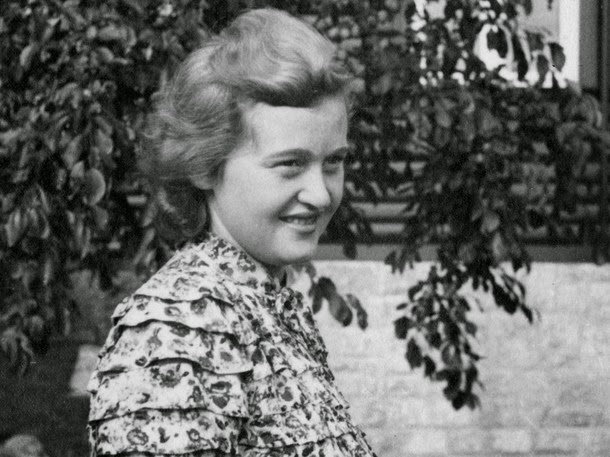 Ilse Koch, née Köhler, the daughter of a factory foreman, was born in Dresden, Germany in 1906. In the elementary school she attended, she was remembered as a polite and happy child. At the age of 15 she studied accountancy and went to work as a bookkeeping clerk. Ilse joined the Nazi Party in 1932 and met her future husband, Karl Otto Koch, two years later in 1934.

In 1936 she became employed as an SS-Aufseherin (Overseer) at the Sachsenhausen concentration camp near Berlin, which Karl Koch, now her fiancé, commanded. She was married the same year and in 1937 she went with her husband to Buchenwald when he was made Commandant.

Karl Koch, ran Buchenwald from 1937 until early 1942, when he was transferred to Majdanek. Ilse Koch remained at Buchenwald until 24 August 1943, when she and her husband were arrested on the orders of Josias von Waldeck-Pyrmont, SS and Police Leader for Weimar, who had supervisory authority over Buchenwald. 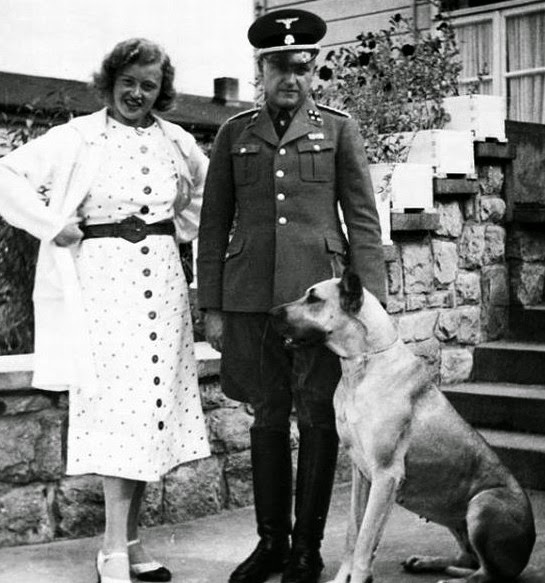 Ilse Koch with her husband Karl at Buchenwald

The charges against the Kochs comprised of private enrichment, embezzlement, and the murder of prisoners to prevent them giving testimony.

Frau Koch was investigated for 8 months by Dr. Georg Konrad Morgen, an SS officer who had been assigned in 1943 to look into accusations of corruption and murder in the Buchenwald camp.

The rumor, circulated by the inmates at Buchenwald, that lamp shades had been made out of human skin, was thoroughly investigated by Dr. Morgen but no evidence was found. Frau Koch was released without charge.

Her husband, Karl Koch, was found guilty of murdering prisoners and sentenced to death by an SS court in Munich. He was executed by firing squad in Buchenwald on April 5th 1945.

After she was acquitted, Ilse went to live with her surviving family in the town of Ludwigsburg. She made no attempt to conceal her identity and she was arrested, along with 31 other alleged war criminals from Buchenwald, by U.S. authorities on 30 June 1945.

She was brought before an American Military Tribunal held at Dachau on April 11, 1947. Even though Ilse Koch had been acquitted in Morgen’s court, the former inmates at Buchenwald still insisted that she had ordered prisoners to be killed, so that their tattooed skin could be made into lamp shades. 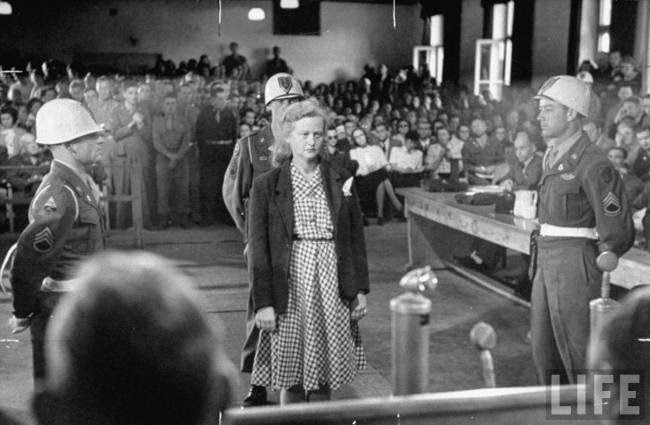 Ilse Koch was brought before an American Military Tribunal in 1947

When the American liberators arrived at Buchenwald, they were told about the gory accessories in Frau Koch’s home. A display table was set up and a propaganda film, directed by Billy Wilder, was made to document the atrocities in the camp.

Billy Wilder, an Austrian Jew with an axe to grind, had fled Germany after the rise of the Nazi Party. By 1945 he had become a skilled Hollywood screenwriter and film director.

Billy Wilder, left, is caught on camera at Buchenwald 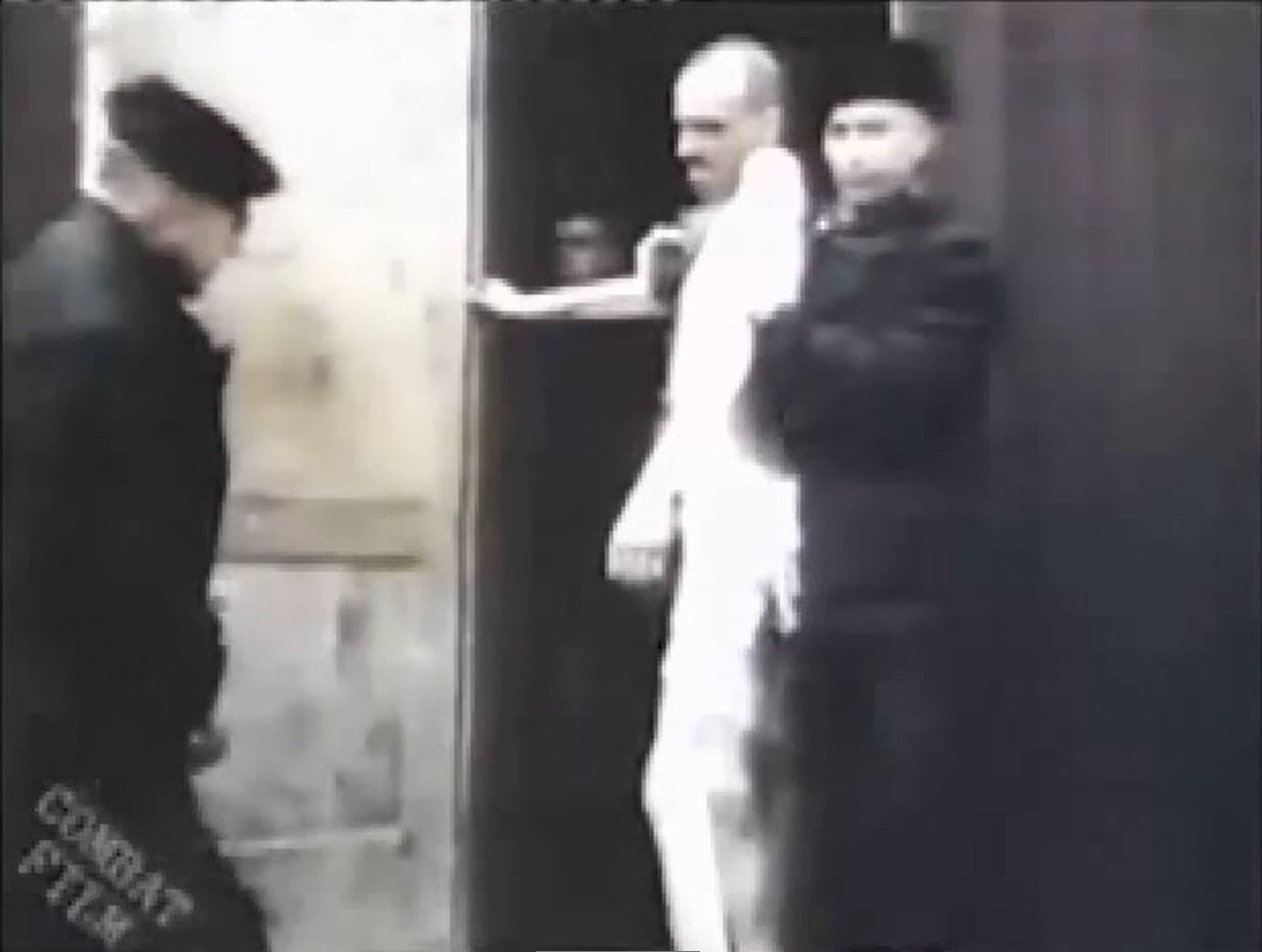 The photograph below is a still shot from Billy Wilder’s film. It shows preserved pieces of tattooed skin laid out on a table, and a table lamp with a shade allegedly made from human skin. The table was set up by an American Psych-Ops team in order to manipulate public opinion. 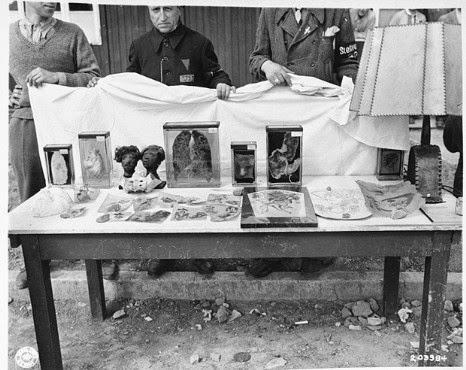 The table lamp with the lampshade, allegedly made of human skin, conveniently disappeared before Ilse Koch came to trial making it impossible to carry out a scientific examination

The story of the making of human lampshades at Buchenwald received a great deal of attention by the American press, and in the two years between the liberation of the camp and the start of the Buchenwald trial at Dachau, there had been considerable coverage in American newspapers.

By the time the trial got underway, there was not the slightest doubt in the minds of most Americans that Ilse Koch was indeed guilty of this despicable crime. In reality Ilse Koch hadn’t been in Buchenwald since August 1943 when she and her husband were arrested by the SS.

At the trial, which took place at Dachau in 1947, Ilse Koch was charged with “participating in a criminal plan for aiding, abetting and participating in the murders at Buchenwald”. 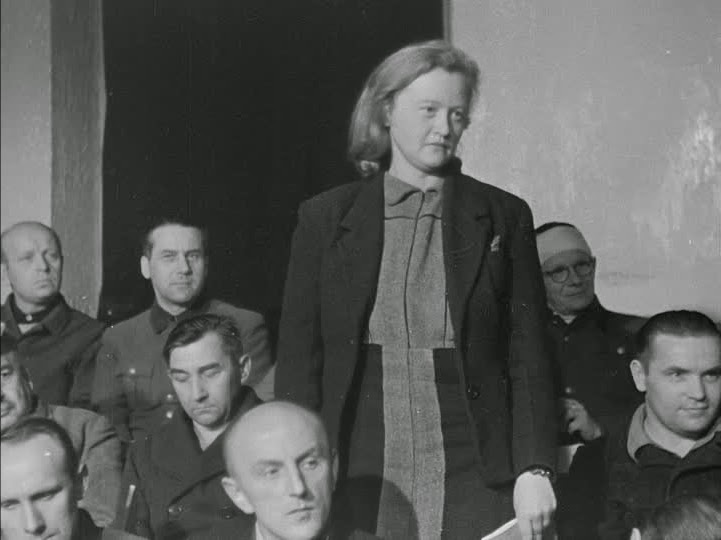 Ilse Koch in the American Military Court at Dachau

Koch made the stunning announcement in court that she was eight months pregnant. She was 41 years old at the time and was being kept in isolation with no contact with any men except the American interrogators, most of whom were Jewish.

According to Dachau court reporter, Joseph Halow, in his book “Innocent at Dachau,” there was speculation among the court reporters that the father was Josef Kirschbaum, a Jewish interrogator who was one of the few men who had access to her prison cell.

Halow wrote: “At Dachau many of them (the Jews) scarcely concealed their hatred for the Germans. Their feelings may have been understandable, but it was completely unacceptable for American authorities to put Jewish interrogators such as Harry Thon, Josef Kirschbaum, and Lt. William Perl in positions where they had their enemies at their mercy.” 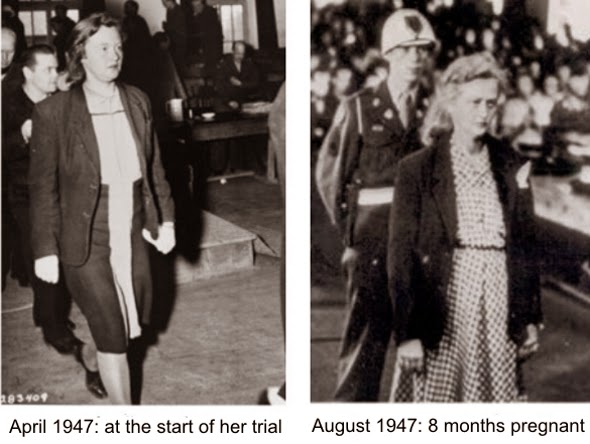 On 19 August 1947, she was sentenced to life imprisonment for “violation of the laws and customs of war”. Her baby was born in a prison cell a month later in September, 1947.

General Lucius D. Clay, Commander in Chief of U.S. Forces in Europe and Military Governor of the U.S. Occupation Zone of Germany, 1947-1949, carefully reviewed the Ilse Koch case in 1948 and found that, whatever her other misdeeds, the lampshade charge was baseless. He commuted her sentence from life imprisonment to four years and informed the Army Department in Washington “There is no convincing evidence that she [Ilse Koch] selected inmates for extermination in order to secure tatooed skins or that she possessed any articles made of human skin.” [1]

During a 1976 interview Clay recalled the case:

We tried Ilse Koch … She was sentenced to life imprisonment, and I commuted it to three [four] years. And our press really didn’t like that. She had been destroyed by the fact that an enterprising reporter who first went into her house had given her the beautiful name, the “Bitch of Buchenwald,” and he had found some white lampshades in there which he wrote up as being made out of human flesh.

Well, it turned out actually that it was goat flesh but at the trial it was still human flesh. It was almost impossible for her to have gotten a fair trial.

After her life sentence was commuted to 4 years by General Clay, Ilse Koch was released from Landsberg prison because she had already served 4 years in prison from the time of her initial arrest.

In his autobiography, entitled “Decision in Germany,” General Clay wrote the following:

Among the 1672 trials was that of Ilse Koch, the branded “Bitch of Buchenwald,” but as I examined the record I could not find her a major participant in the crimes of Buchenwald.

A sordid, disreputable character, she had delighted in flaunting her sex, emphasized by tight sweaters and short skirts, before the long-confined male prisoners, and had developed their bitter hatred.

Nevertheless these were not the offenses for which she was being tried and so I reduced her sentence, expecting the reaction which came.

According to Arthur Lee Smith, author of “Die Hexe von Buchenwald,” the American government put pressure on the Germans to put her on trial again in 1949 on charges of ordering the murder of Buchenwald inmates.

Her trial before the American Military Tribunal in 1947 had only covered crimes committed between January 1, 1942 and April 11, 1945. Crimes that she might have committed between 1936, when she was a guard at Sachsenhausen, and January 1, 1942 had not been included in the proceedings of the American Military Tribunal at Dachau.

The hearing opened on 27 November 1950 before the Assize Court at Augsburg and lasted seven weeks, during which 250 witnesses were heard, including 50 for the defense. Koch collapsed and had to be carried from the court in late December 1950, and again on 11 January 1951.

The hearing opened on 27 November 1950 before the Assize Court at Augsburg and lasted seven weeks, during which 250 witnesses were heard, including 50 for the defense. Koch collapsed and had to be carried from the court in late December 1950,[13] and again on 11 January 1951 – See more at: http://birminghamnationalist2.blogspot.co.uk/2013/08/holocaust-ilse-koch-wanted-my-skin-for.html#sthash.GJg3uLaH.dpuf

December 1950, Ilse Koch, looking listless and
disarrayed, is led into the courtroom for trial 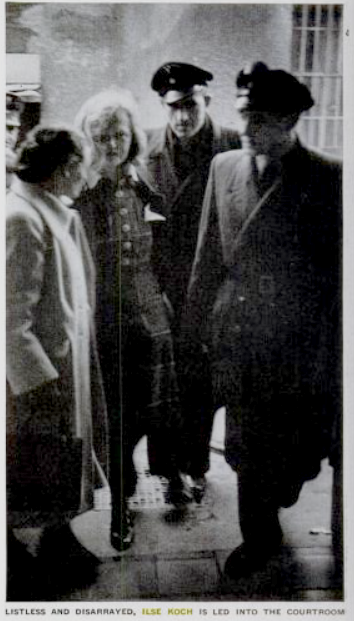 Once again the lampshade charge was brought up and again it was thrown out of court for lack of evidence.

Under pressure to nail her, the German court found Ilse Koch guilty of incitement to murder, incitement to attempted murder and incitement to the crime of committing grievous bodily harm. In January 1951, she was again sentenced to life in prison.

Karl and Ilse Koch had two sons, including one who committed suicide after the war. Ilse also had another son, the one that was conceived while she was in a prison cell at Dachau.

He was born in the Aichach prison near Dachau, where she was sent to serve her life sentence, and was immediately taken from her. At the age of 19, he found out that Ilse Koch was his mother, and he began visiting her regularly at Aichach. They got along well and Ilse wrote poetry for him, according to Joseph Halow.

On one of his scheduled visits, Ilse’s son was stunned to learn that she had killed herself the night before.

After serving over 20 years in prison, Ilse was found dead in her cell at Aichach on September 1, 1967. Her death, allegedly by hanging, was ruled a suicide.

Frau Koch never revealed the name of the man who impregnated her, except perhaps to her son, but if he knew, he never mentioned his father’s name.

Today the body of the so called, “Bitch of Buchenwald”, a name she didn’t deserve, lies in an unmarked and untended grave in the cemetery at Aichach. According to Joseph Halow, author of “Innocent at Dachau,” her son disappeared after learning of his mother’s suicide.”
References:

Globalist Worcester Bishop and Traitor, John Inge, Says Let All the Migrants In!

‹ Asking a question can get you jailed › When will white men again act naturally when their women are attacked?