The secret nuclear deal our leaders have signed with Russia. Lots and lots of HUGS all around!! We found this on the South African Mail and guardian site.

from the Africa Mail and Guardian NOT an original EKP article, however our Russian corespondent’s take on it can be found below.

Details of the secret nuclear deal that Energy Minister Tina Joemat-Pettersson signed with Russia last year can, for the first time, be revealed. The text, which has been jealously guarded by her department and Russian nuclear company Rosatom, holds many dangers for South Africa.

It creates an expectation that Russian technology will be used for South Africa’s trillion-rand fleet of new nuclear power stations. And by laying the groundwork for government-to-government contracting, it appears designed to sidestep the constitutional requirement for open and competitive tendering. 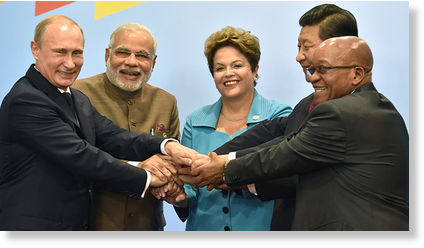 Once the agreement comes into force, the Russians will have a veto over South Africa doing business with any other nuclear vendor. And it will be binding for a minimum of 20 years, during which Russia can hold a gun to South Africa’s head, in effect saying: “Do business with us, or forget nuclear.”

The agreement confirms the government’s intention to make “Atomic Tina’s” energy department the procuring agent for the nuclear programme rather than Eskom – where the country’s nuclear expertise lies, despite the utility’s travails. Joemat-Pettersson signed the agreement in Vienna on September 21 last year, three weeks after President Jacob Zuma held talks with his Russian counterpart, Vladimir Putin, at the latter’s country estate.

It led to an immediate outcry as it appeared that Russia was being favoured over other vendor countries. But the energy department said the agreement merely “initiates the preparatory phase for the procurement for the new nuclear build programme” and it undertook to sign agreements with other nuclear vendors – France and China – next.

It asserted again this week that it is still “engaged in the preprocurement phase” and the “type and nature of [the] procurement process has not been approved by Cabinet”.

The department has refused amaBhungane and others’ requests under the Promotion of Access to Information Act for copies of the Russian, French and Chinese agreements, citing “the delicate process of negotiations … with other countries”.

The terms of the agreement lean heavily in Russia’s favour. They:

I’d like to begin with Vladamir Putin’s own words.

“I will tell you a small story, which took place in St Petersburg about 50 years ago. A young non-Jewish boy grew up in a very poor family. Those times, most people lived in communal apartments, which had different rooms for families and shared kitchen and living area.

This boy had poor parents who were barely home. He was fortunate that a neighbouring family from another room in the apartment started inviting him over. The father was a professor who helped him with his homework, they babysat for him. He was a young boy.

The family, who was Jewish, also invited him for the Friday night Shabbat meals. He remembers how they used to take out an old book and read from this book after the meal.” Excerpt from famous Vladimir Putin speech to Zionist Russian Society.

That was taken from an article Mr Putin wrote about his love for Jews.

This is not meant as an attack on Putin or his abilities as leader of RUSSIA. It is directed at westerners that betray their own nations by misguidedly supporting him due to the perception that he is some sort of White anti-Judaic Knight.

Not many of you will ever have seen, heard of, or read the following speech.

Once you lay your eyes on it, I assure you that you will NEVER see Putin in the same light again.

When I first learned that many European nationalists support the Russian regime over the West, it stunned me to my core.

True patriots would NEVER support a foreign nation over their own no matter how angry they are at their government, especially one that might be responsible for bombing their homeland during a likely WWIII, and may very well just have raped an ancestor of theirs during the last world war. Russian soldiers did in fact rape hundreds of thousands of German women-not to mention the Danish, Finnish, Baltic, Polish & Czech telochka they encountered during their last trek about Europe. I should know-my grandpa, who served in the Soviet Red Army regaled me with tales of the sexual carnage his comrades perpetrated against predominantly Western European women.See picture>>>>

My message to westerners: You are a son of the soil that you were born on and to support another, amounts to treachery. This is in fact the sort of treachery the Islamic Caliphate and Jewish diaspora residing in your nations engage in.

“But, but Putin represents white interests, is opposed to Marxism”, is something I often hear from misguided nationalists when I make that point.

I lived in Russia until March of 2008 and can tell you that our government sees itself not as white Czars, as many of you think, but the reincarnations of Trotsky/Bronstein, Lenin and Kaganovic-exactly as Australian Prime Minister Tony Abbot recently stated.

Putin himself is a self-proclaimed Zionist that has made numerous trips to Israel. He has 4 Jewish advisors and made half his fortune doing dirty deals with two of Russia’s wealthiest Jewish oligarchs. The only reason he went after Berezovsky (a Jew) is because, Berezovsky reneged on a deal they’d made.

Putin, is also in fact is trying to make it illegal to question the Holocaust and bring back a law the Bolsheviks introduced when they took power. He also played the Anti-Semitism card when arguing that Russia needed to invade ‘Nazi Ukraine’, due to the threat Russian and Ukrainian Jews living in South/Eastern Ukraine (namely Odessa, Lugansk and Donetsk) were under.

Putin also sits down with a board of Zionist Jewish advisors once monthly in St Petersburg. Once a month! Even the Americans aren’t that conspicuously Pro Jewish..well, maybe.

For people that wanted more information on Putin’s love affair with Judaism and his Marxist leanings please see this article.

For the speech illustrating his love of Judaism please see below.

I will tell you a small story, which took place in St Petersburg about 50 years ago. A young non-Jewish boy grew up in a very poor family. Those times, most people lived in communal apartments, which had different rooms for families and shared kitchen and living area.

This boy had poor parents who were barely home. He was fortunate that a neighbouring family from another room in the apartment started inviting him over. The father was a professor who helped him with his homework, they babysat for him. He was a young boy. The family, who was Jewish, also invited him for the Friday night Shabbat meals. He remembers how they used to take out an old book and read from this book after the meal.

At that time, the boy said, look how impressive these people are. They never fight with each other. There is respect between the husband and wife; a beautiful family to emulate.

Many, many years later, the same boy grew up and became the vice-Mayor of St Petersburg. There was an issue of opening a Jewish school in St Petersburg, about 19 years ago. The vice Mayor heard that the city government was not giving permission for the school to open.

Today, he has a few more days of being president of Russia, as on Sunday there are elections and it just shows how G-d pre-plans our life with us realizing.

Fifty years, a young boy, was helped by a Jewish family and there is no question that the revival and success of Jewish life today in Russia is due to the president of Russia Mr. Putin.

There was recently an article published in the NY Times by a Professor at Maryland University entitled “the anomaly of the President of Russia and the Jewish community”. One thing that we have seen in the last eight years of Mr. Putin’s presidency is his great support fighting for the Jewish community against anti-semitism. No other president in the world has come out so forcefully in such a radical way against anti-semitism.

I heard from Elliot Shear an hour ago that there is a meal planned at Buckingham Palace by the Duke of Edinburgh in honour of an official visit to the UK by President of Israel Shimon Peres. When Mr. Sharon came to Russia he had many long meetings with Mr. Putin. Every time he came out of such meetings, he said, as Mr. Olmert and Mr. Netanyahu have, that we have a close friend of Israel in the Kremlin.

Once when Mr. Sharon was meeting Mr. Putin, the meeting was taking much longer than expected. Every so often someone would walk into the meeting with a small piece of paper. Mr. Putin would say a few words in Russian and the person would leave. A few minutes later someone else walked in with another piece of paper. The president tells him something and the person walks out. On the third time, Mr. Sharon turns to President Putin and says, when, in Israel, someone comes in during an important meeting with a piece if paper, it’s a sign that something terrible has happened in the country. Did anything happen, should we cut the meeting short.

The president said, actually my staff realised that the meeting is taking much longer than expected, so they offered we should have lunch. I told them that you will surely eat Kosher and I gave them the instructions how to arrange a Kosher meal.

Mr. Putin then said to Mr. Sharon that, looking at you, I am sure you wouldn’t refuse a meal. So I am happy to let you know that we have a Kosher meal coming in, in a few minutes.