, his words, uncensored and unedited. The EKP prides itself on the freedom we give our independent free-lance writers, bringing you the widest possible range of contributors and opinions compatible with our broad principles. For more information write to Pavel on europeanknights@europe.com 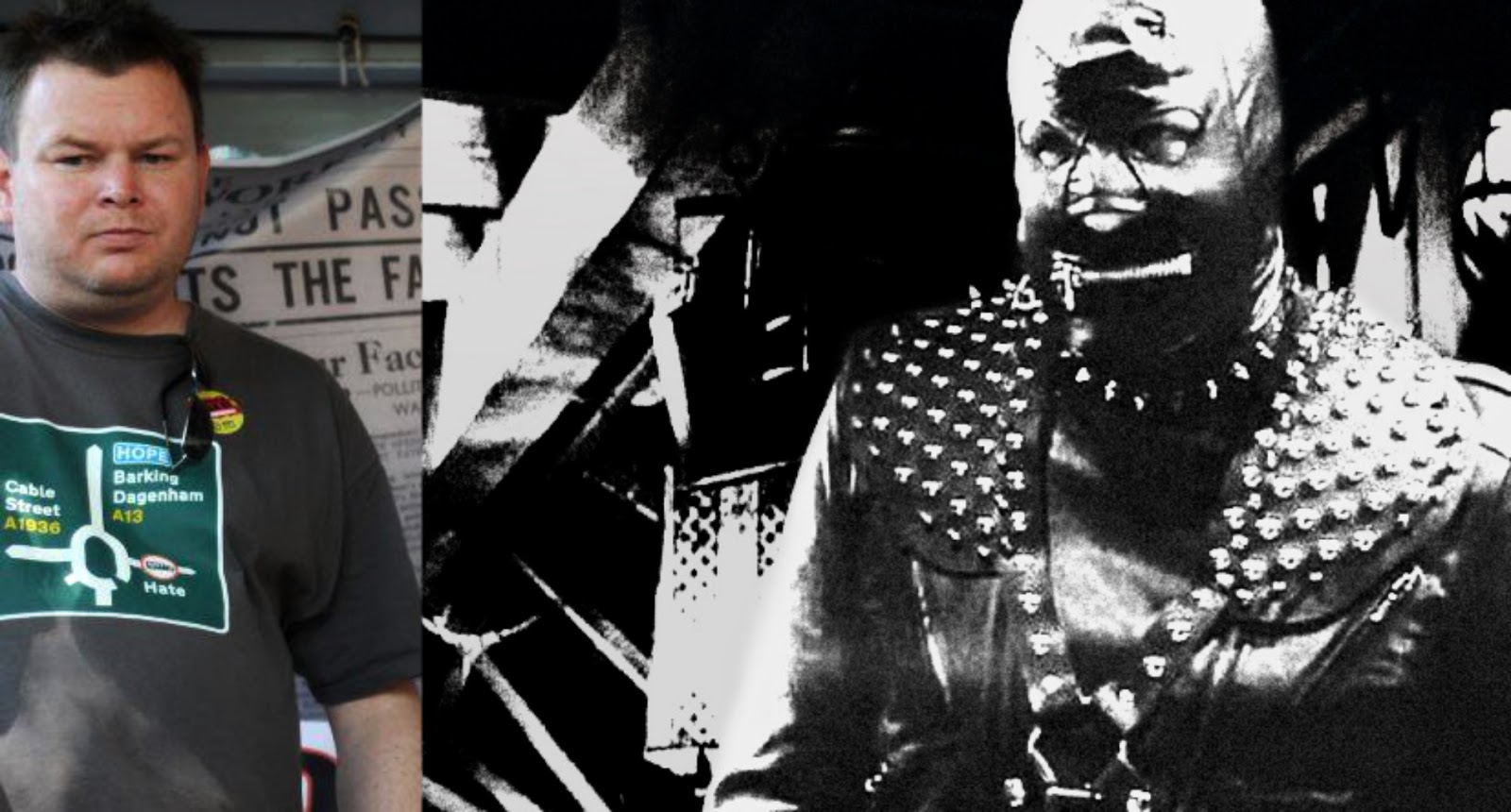 Enjoy our latest exposé on Britain’s vilest traitors. Although this is a serious issue, C plans on having a little fun with this….

What do Julie Lake and Hope Not Hate’s, Matthew Collins have in common?

Besides being two of the ugliest sods to have both been discarded by the BNP and NF….

It now appears the traitorous Marxist scum are working together.

In his latest hit piece on Jack Sen, the Hope Not Hate charlatan, all but admits that he has been colluding with Julie Lake.  Lake contends that pork chop Collins must have a special kind of hatred for Sen due to the fact the bent antifascist traitor has chosen to side with her, a “genuine nationalist”, over Sen.

Hilarious logic only someone as thick (and we aren’t referencing its girth) as Lake could espouse.

“Given my years in the BNP and NF, they (Hope Not Hate) would not have hesitated in exposing me all over their site should there have been any evidence to it (sic). He chose instead to expose Sen.”

The fact comical Collins chose to expose Sen with information Lake sent him, should tell our readers all they need to know about how effective Sen has been at bringing genuine nationalists together, while simultaneously exposing traitors in the Nationalist camp, showing just how bloody scared degenerates like Lake and Collins are.

Either Sen is so genuine a nationalist Collins would betray his own conscience by relying on former nationalist nobody, Lake, for info, or he and the heifer are conspiring with one another due to their shared hatred of this country, and obsession with Sen. I believe both to be true.

I think it’s fair to say that traitors, Lake and Collins, are in bed with one another. And it’s not only because the two of them are too bloody ugly to find anyone better to hop into the sack with or that fat people typically stick together.

Their decision to work with one another should be attributed to their batting for the same team-the Left.

The fact that vile Collins, who can’t write an article to save his life, defends a woman who has been barred by police from working with children, is under investigation for stalking and terrorising the government official tasked with investigating her abuses, has been arrested for harming a child, should tell you all you need to know.

“Hilariously, I could not give two sh&^s what either of these two insignificant trogs and social misfits think of me or my work. We are about to launch a massive new project, and I simply don’t have time to concern myself with them. The fact they are still writing posts about me that nobody even reads, in spite of the fact I have ignored both of them for months, says it all. Collins and Lake are a perfect example of what good people in this fine country are up against, as well as how far the masses have fallen. We have lots of work to do.”

When asked about Lake’s allegation that he hides behind his wife and child, Sen laughed.

“The vile woman has my address. In fact she shared it all over the bloody internet, along with my mother, sister and brother’s addresses. Thus far no one’s knocked on my door. She and anyone else that want to meet me know how they can do so. We were worried for a while due to the fact it is quite frightening not knowing what your abusers look like. But we are now used to it, have alerted the police and prepared for all eventualities.”

And it’s not like Lake’s abusers won’t see or hear it coming. Just check for pavement damage on a daily basis. If she gets past the gate, she’ll probably get stuck in Sen’s doorway anyway. Collins isn’t man enough to leave his computer, let alone harass Sen in person.

Although Sen did say he was concerned as Lake had shared his address online, had even harassed his mother, he spoke of “bravery” and “the importance of pressing on in the face of adversity.”

When I asked Jack about the specific threats he has received from Lake and co, he responded,

“They’ve literally encouraged people to do me harm. Although it’s a bit disconcerting and has troubled my family, I doubt they’ll do anything. Lake and her friends (Max Musson, Dave Yorkshire etc) are cowardly trolls, who thrive on the limited amount of publicity my response to their foolishness has generated them. Like the fool, Collins, they are failures of the grandest proportion. THAT is why they harass me, trawl the internet looking for information on someone that wouldn’t piss on them if they accidentally set themselves alight with their own filthy cigarettes. It’s also why Lake’s chosen to physically attack children, why she has been arrested for abuse, why she is being investigated for harassment, why she stalks people far superior to her in every way shape and form. These people are nothing. End of.”

Damn straight. Actually the ammonia from Lake’s body odour added to the high quantity of methane produced from all the dog shit strewn across her home would probably ignite Bristol-probably keep it burning for years. (police source confirmed lake’s house is full of dog excrement. I’ts even on the bedding. I saw it in her front garden myself when I protested her)

Sen also mentioned how Lake had stalked a copper in Bristol as well as harassed children to such an extent that she was now officially barred from dealing with them-horrid woman.

Oddly, Hope Not Hate’s Mike Collins doesn’t seem too concerned that a woman whose cause he’s apparently championed, is a convicted child abuser. Perhaps he too was in on the action. One need only look at the scumbag, then read about his proclivites on Hope Not Hope Exposed, to know he’s up to no good. The Left have a tendency to defend paedos after all. Think Harriet Harman and the Paedo Info exchange and Rotherham, if you harbour any doubts.

Everything in fact the pig Collins writes about Sen, has been ‘unearthed’ by parasitic Microchaetus Julie Lake or as we refer to it at the EKP, ‘Lake Worm’.

Hope Not Hate’s resident gimp, Matthew Collins, writes (and we use the term loosely):

“The person Sen keeps rambling on about (Lake) – accusing them of child abuse (she was convicted Collins!), appears to have once whacked some boys who were being naughty. For some reason, Sen is desperate for people to repeat his wild accusation. What’s bizarre is that it’s not as if the far-right is short of actual and real child abusers. But, day after day, Sen keeps pestering us to repeat his accusations. You really aren’t the rocket scientist in your family, are you Jack? (again information unearthed by the Bristol maggot, Lake worm)

Sen has now announced he is to use “about half” of his resources on attacking other fascists. Visitors to his attic will be relieved. One half of his resources is cheap whiskey, by all accounts.”

Some advice for the comical Lake and Collins. Eat less, exercise more and you’ll harbour far less hatred in your hearts. Jack’s new fitness video will be out soon. We’ll send you a link, free of charge.

And Lake, or should I say Jules Epstein?

We legally protested outside your filthy hovel of a bungalow as you are a criminal, a paid agent provocateur, and are admittedly in cahoots with Hope Not Hate. You abuse children, target the vulnerable and are an unhinged bully who needs to be stopped. This (our reaching hundreds of thousands by literally flooding the internet and search engines with truthful info about you) won’t stop until you leave us alone and cease from harassing us. You mention Sen’s child, we will react without conscience.You abuse his mother, you will know about it. You call my family names, or insult me in any way , shape or form, and I will protest you, flood the net with truthful info.

The net is a perfect vehicle to defend the innocent from abusive keyboard commandos that use their real names. Especially as we all but dominate all search engines when it comes to exposes of criminals with paltry search engine records. Your search engine record is comically small, downright non-existent. Not anymore abuser, stalker, monster 😉

How many bloody times are we going to have to ask you to LEAVE US ALONE! Learn your lesson and move on Hope Not hate spy.

And clean the dogshit from your yard (there’s nary a shrub in site, so it is in fact a yard). You have grandkids supposedly and it’s unsanitary. Your neighbours are none too pleased they have to share their council estate with such a degenerate slob. We knocked on quite a few doors you know….

And we will be leafletting your area soon. This time we will have time to spend the day in your community getting the word outabout how you’ve targeted an innocent family and their children.

Here’s a video I made outside Julie Lake’s filthy hovel of a council house. If lake ever buys a sign for her houe, it should read, “Filthy Hovel of a Council House.” i’ve seen some pretty filthy council houses on my travels but lake’s takes the cake. Even the coppers who investigated Lake for abuse of another cop, had a laugh at how bloody filthy this horrid woman’s house is.

So Lake, not only are you one of the filthiest people I’ve ever lied my eyes on, your house is filthy as well! You should be proud.

Have an issue with me? Write me on carlmason123@icloud.com

‹ Rhodesian-South African calls majority of his white people “morons” and “insane” for learning nothing even from the most recent, searing tragedies; Trump, bribes, and Epstein blackmail › Mass murderer of Americans, liar, traitor, Logan Act violator and WMD smuggler Zalman Shapiro, is dead