When I walk down the street in my once sleepy Lancashire village, where one in four men are now of migrant origin, I see gangs of EU nationals carrying themselves in a similar manner to the sort of black Americans one sees in US ghettos or south African townships. And trust me when I tell you, as someone that’s been in one to many confrontations with them, that they’re just as bloody dangerous!

They speak in a ghettoised Slavic accent, as bizarre as that sounds and posture towards non-tribals as if they’re in Soweto, or in their case, back home east of the Oder. If you didn’t see it, you wouldn’t believe it.

That’s why it shouldn’t surprise people that our crime rates have shot through the roof since we opened the flood gates to anyone with a European passport. That the sort of violence these bastards are used to back in their shitholes has ended up taking the life of an innocent woman in the following case. Lots of innocent people….

Sure, its easy to blame his ‘Schizophrenia’, as our bloody government and the bastard Mirror have in this instance. Then why did he have Cocaine and weed in his system and NOT Schizo meds?

Quit lying to us!

I blame our government for letting the criminal cu*& in so he could kill this innocent woman and shatter her family’s life. I blame people like Tony Blair that have facilitated a situation where this man’s ilk can waltz in without being vetted and PREY on our most vulnerable. (Remember, the  best people from Eastern Europe aren’t coming. It’s their refuse. My wife’s fathers family comes from Russia and they are decent law abiding people. They aren’t the ones coming)

A mum-of-two was knifed to death by a schizophrenic man trying to kidnap her children while her husband listened helplessly over the phone.

Defenceless Nicola Cross, 37, was stabbed to death by stranger Marcin Porczynski after he smashed his way into the property in Hemel Hempstead, Hertfordshire, on September 14 last year.

She had been attempting to protect her two young children from the intruder, who was trying to make his way to where they slept, the court heard.

Her husband Daniel, who Mrs Cross rang in a panic, could only listen as his wife pleaded with the killer before she screamed loudly and the line fell silent.

She had been stabbed 10 times.

The Polish national was suffering from paranoid schizophrenia at the time and had been hearing voices telling him to “free” children or risk harm to his own family.

The attacker was stopped by police before he could leave the address with the youngsters.

During a hearing at St Albans Crown Court, he denied murder but admitted manslaughter on the grounds of diminished responsibility, which was accepted by the prosecution.

He wept in the dock as a victim impact statement from Mr Cross was read to the court, who said he saw “no future happiness, no end to this trauma until my life comes to an end”.

Mr Cross was joined by 13 other family and friends of his wife in court, many of whom could be heard softly sobbing as the details of the crime were read out.

Prosecutor Chris Donnellan told the court how the mentally unstable attacker, 24, had been seen roaming the neighbourhood in the hours preceding the attack, knocking on doors and asking if there were children there.

Mrs Cross called the police shortly before 11pm after Porczynski began peering through the windows of her house on Dunlin Road.

After initially being stopped by officers, who found him to be a “bit distant”, he was allowed to return to his home on nearby Claymore Avenue.

He returned to the area at around 11.30pm – this time armed with a small knife.

At first he broke into the neighbouring address by accident and, while police responded to the reports of a burglary, officers heard a smash and screams from next door.

After breaking through the patio doors of Mrs Cross’s home, Porczynski had grabbed a larger knife from the kitchen and climbed the stairs.

Mr Donnellan said it appeared the smaller knife was initially used to attack the mother-of-two, which was then discarded in favour of the large one. 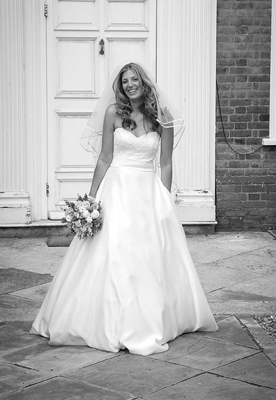 © Mirror Nicola Cross smiles with joy on her wedding day Mr Cross, who was a distant witness to his wife’s violent final moments, said in a statement: “That phone call plays over and over in my head, along with Nik’s screams and her pleading for her life.”

Following the attack, Porczynski went up to a bedroom, where he laid the bloody knife on a side, before trying to carry the children away but he did not physically harm them, the court heard.

A neighbour heard one of the children telling the attacker: “No, I don’t want you here.” Officers then stopped the defendant before he left the property and reported he appeared “vacant”.

They came across the children at the bottom of the stairs, where one told them: “He has hurt my mummy badly.” The youngsters, who were said to be in a state of shock, were then kept in a room upstairs as officers attended to the mother, who was declared dead at the scene.

Mr Cross’s statement continued: “I will never forgive myself for not being there to protect her.” Traces of cocaine and cannabis were found in the killer’s bloodstream but the prosecution said it did not have a bearing on the attack.

The court heard that the defendant had started behaving abnormally three weeks before he killed Mrs Cross, alarming a friend by frequently referring to fictitious events.

After his arrest, the court heard he claimed he believed he had to save the children, who were being “starved”.

Porczynski will be sentenced on Monday.

‹ Paul Craig Roberts: When will they assassinate Trump as they did JFK, RFK, etc? March 1 › My personal triumph of the will over the secret, federal MK-ULTRA and Manchurian Candidate programs for the kids of the “elite”