(Translated and with many photos from videos added by me, John de Nugent]

My source in Berlin told me this report was posted by a German cop anonymously to Facebook in the hopes it would be shared; this method of getting the truth out has been used before.

The state is at the end … The information comes from a policeman from Schleswig-Holstein province who was sent into the city of Hamburg. He has been with the police for 20 years.

Hamburg, a city-state of 1.8 million, and the neighboring province of Schleswig-Holstein, pop. 2.8 million. I did a NATO “Reforger” exercise in Holstein –yes, as in the cow breed — as a Marine NCO in 1979.) 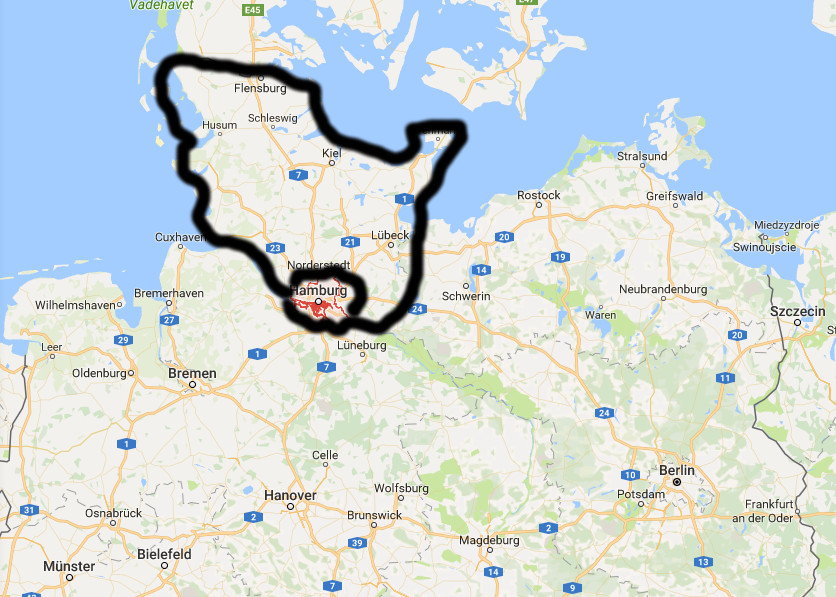 According to him, the situation for the police officers was life-threatening. The disappeared had hid hydrofluoric acid in fire extinguishers, and this was to be sprayed on the policemen from above. 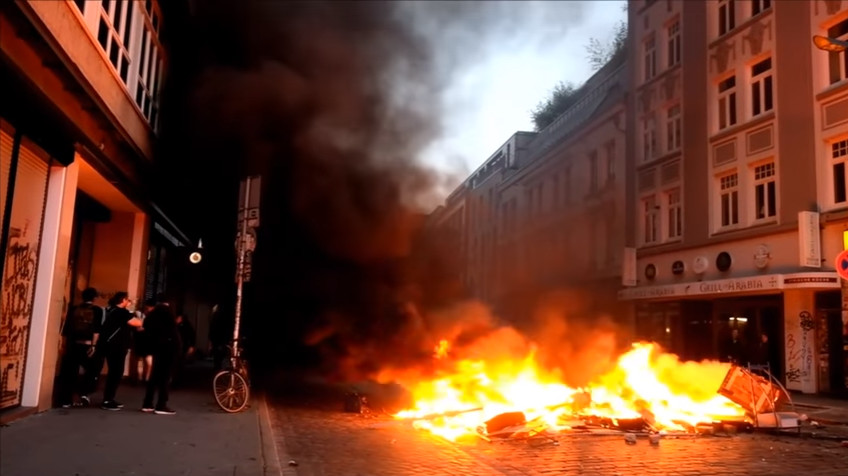 A real Antifa hero in Paris smacks  a blond female reporter for  RT in the face: .https: //www.youtube.com/watch? V = nS2NbNwAdtw

Antifa-wog strikes a blond American white nationalist from behind 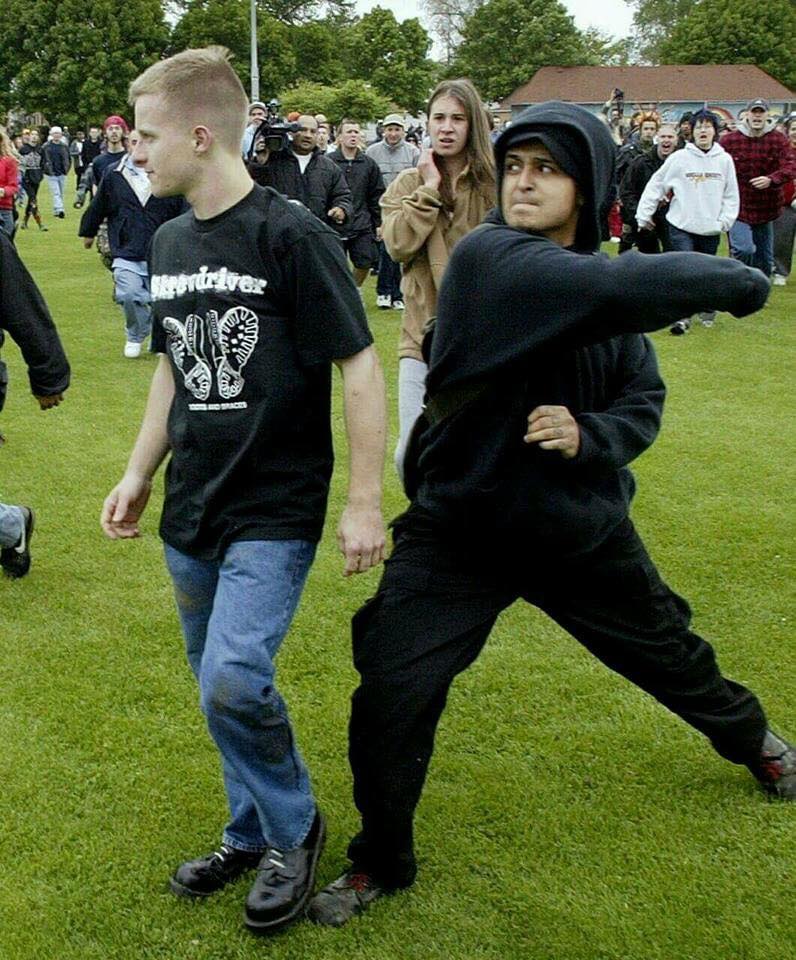 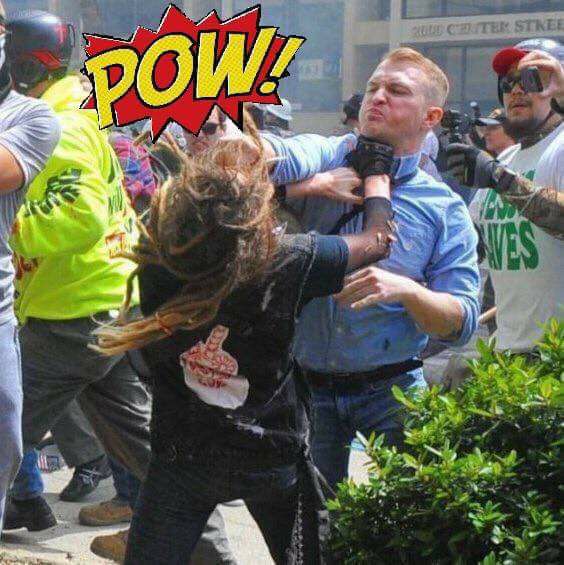 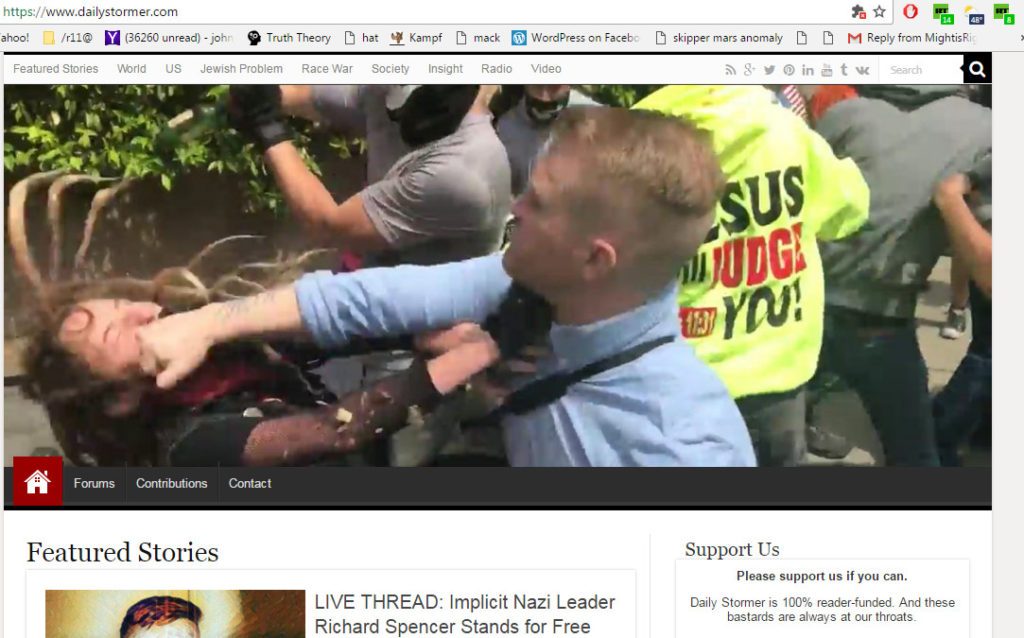 He said, “They wanted to kill. They were not accepting it as a justifiable possibility, but actually aiming to kill.”

Contact with 40-hydrofluoric acid leads to death if a palm-sized skin exposure happens.

Hydrofluoric acid is a solution of hydrogen fluoride (HF) in water. It is a precursor to almost all fluorine compounds, including pharmaceuticals such as fluoxetine (Prozac), diverse materials such as PTFE (Teflon), and elemental fluorine itself. It is a colourless solution that is highly corrosive, capable of dissolving many materials, especially oxides. Its ability to dissolve glass has been known since the 17th century, even before Carl Wilhelm Scheele prepared it in large quantities in 1771.[2] Because of its high reactivity toward glass and moderate reactivity toward many metals, hydrofluoric acid is usually stored in plastic containers (although PTFE is slightly permeable to it).[3]

Hydrogen fluoride gas is an acute poison that may immediately and permanently damage lungs and the corneas of the eyes. Aqueous hydrofluoric acid is a contact-poison with the potential for deep, initially painless burns and ensuing tissue death. By interfering with body calcium metabolism, the concentrated acid may also cause systemic toxicity and eventual cardiac arrest and fatality, after contact with as little as 160 cm2 (25 square inches) of skin.

Tissue death in a finger; no pain is felt at first 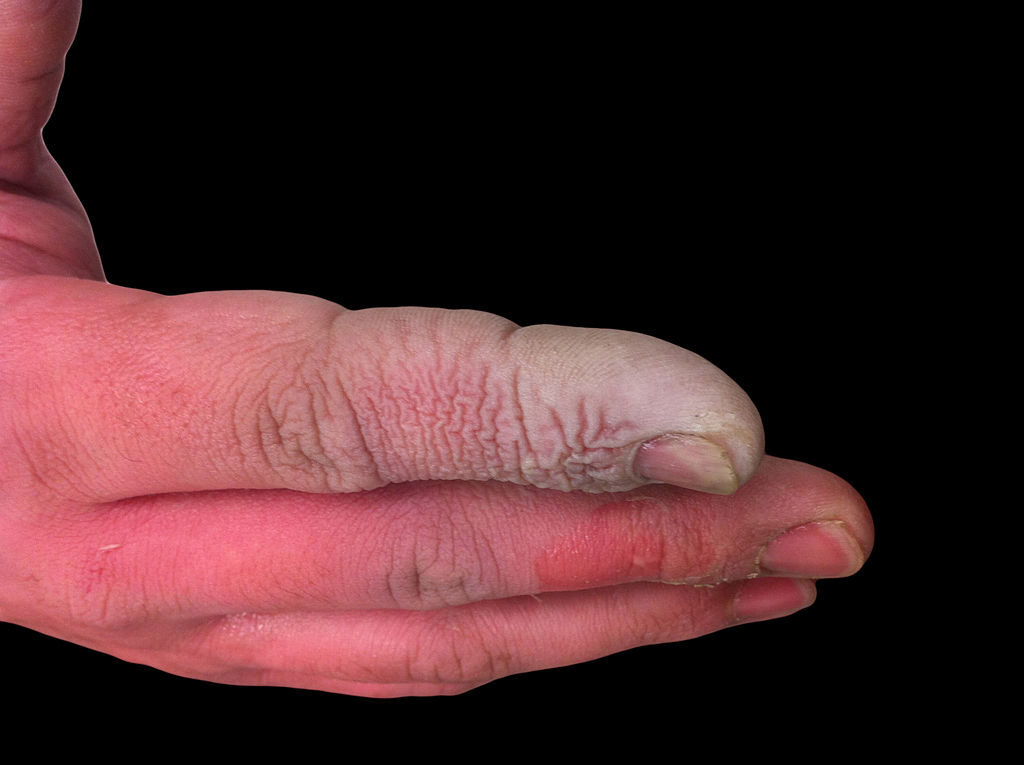 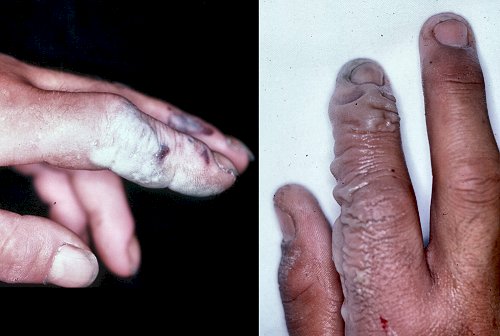 In addition to the corrosive effect, the risk of hydrofluoric acid contributes to blocking the calcium and magnesium metabolism and inhibiting important enzymes. This leads to acute menacing metabolic disorders, which can be fatal under multiple organ failure. [8] Hydrofluoric acid also damages the nervous system.

[…] In addition to being a highly corrosive liquid, hydrofluoric acid is also a powerful contact poison. Because of the ability of hydrofluoric acid to penetrate tissue, poisoning can occur readily through exposure of skin or eyes, or when inhaled or swallowed. Symptoms of exposure to hydrofluoric acid may not be immediately evident, and this can provide false reassurance to victims, causing them to delay medical treatment.[9] Despite having an irritating odor, HF may reach dangerous levels without an obvious odor.[5] HF interferes with nerve function, meaning that burns may not initially be painful. Accidental exposures can go unnoticed, delaying treatment and increasing the extent and seriousness of the injury.[9] Symptoms of HF exposure include irritation of the eyes, skin, nose, and throat, eye and skin burns, rhinitis, bronchitis, pulmonary edema (fluid buildup in the lungs), and bone damage.[10]

Once absorbed into blood through the skin, it reacts with blood calcium and may cause cardiac arrest. Burns with areas larger than 160 cm2 (25 square inches) have the potential to cause serious systemic toxicity from interference with blood and tissue calcium levels.[11]

On the first afternoon [of the “protest”], attempts were already made to spray and set policemen on fire with methylated spirits. [That is alcohol for general use that has been made unfit for drinking by the addition of about 10 percent methanol and typically also some pyridine and a violet dye. It is also called ethanol, ethyl alcohol, or just alcohol.]

At that point, the police are already “through” — they are completely fed up to the point of quitting the police force. 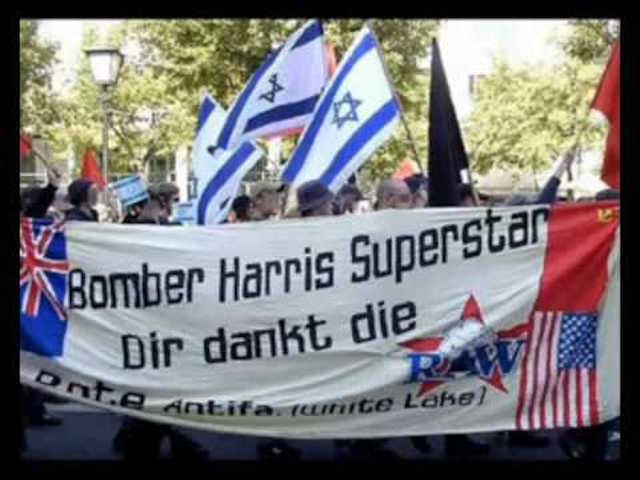 Antifa in Berlin spread out a huge sign saying: “Germany, you rotten piece of sh–t.”  Normally this would result in arrests for “hate speech,” but never with antifa. 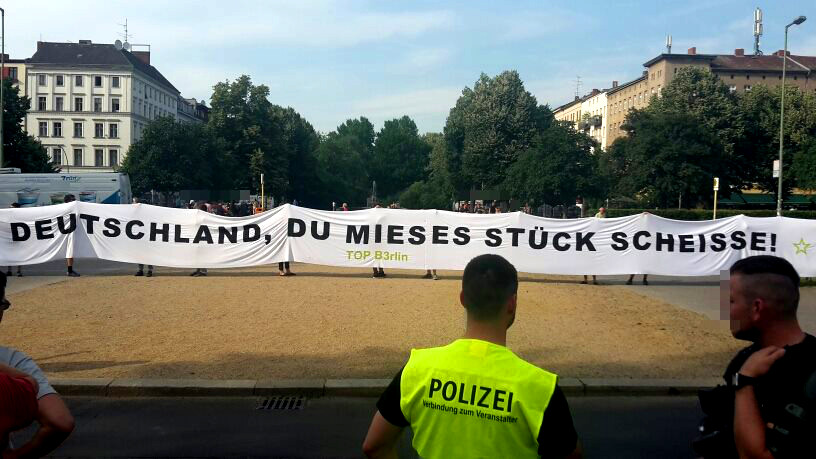 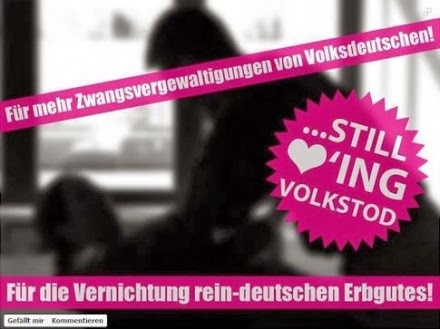 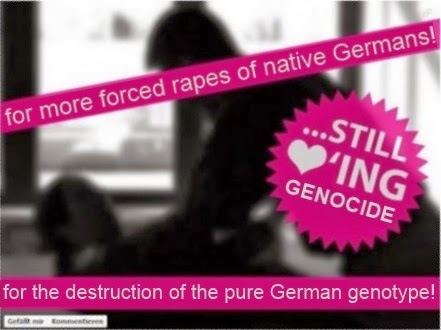 Supposedly one policeman has died, and another policeman has lost his eyesight due to an explosive (firecracker thrown at his face); he is blind. There are several very seriously injured policemen.

Satire:  The keyboard and vocabulary of an Antifa consist of these keys. 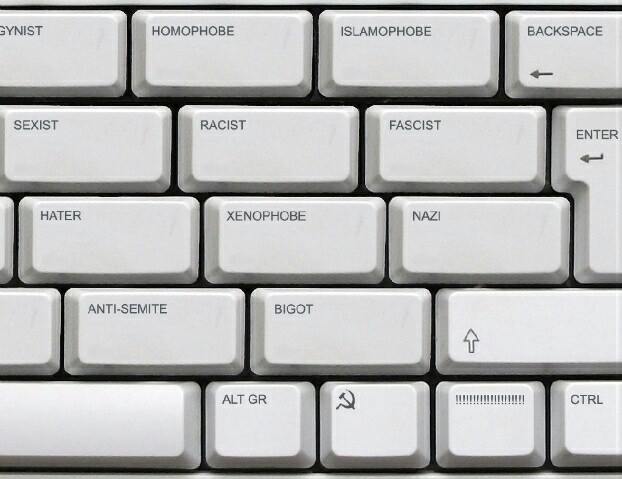 There were also foreign special forces (Austrians [the Cobra unit]) brought in to help; houses had to be cleared in house-to-house fighting of these vermin, because they are life-threateningly dangerous.

[JdN: My source also said the elite GSG-9 anti-terrorism commandos — photo — of the German Federal Police were in use.]

A quarter of the entire state police of Schleswig-Holstein [the next province over] was used in the Hamburg operation. 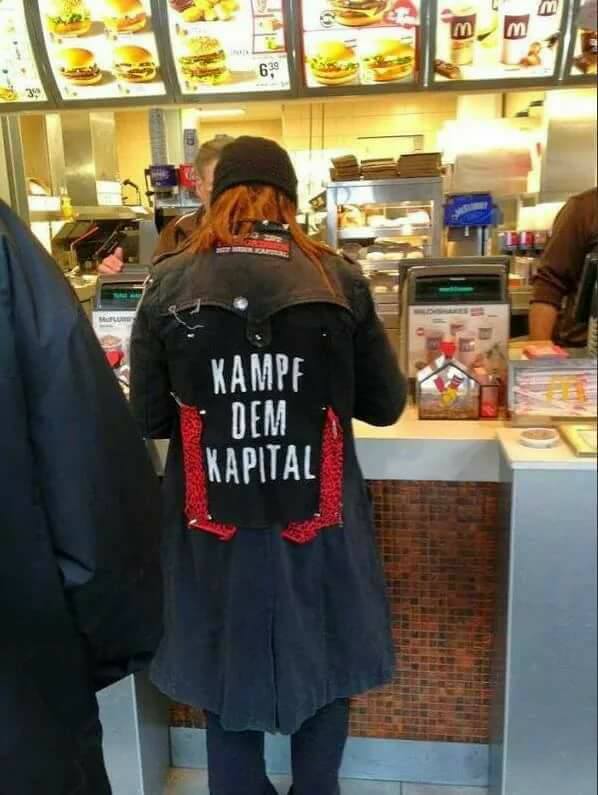 They were just recently called up, called into Hamburg, and thrown into the battle. On the police radio, the conscripts were warned that they were entering “warlike situations.”

But those police officers called up are just normal family men and women, husbands, wives, fathers and mothers. But these orders turned them into soldiers.

Antifa loots a store like any common criminals, supposedly part of “fighting capitalism” 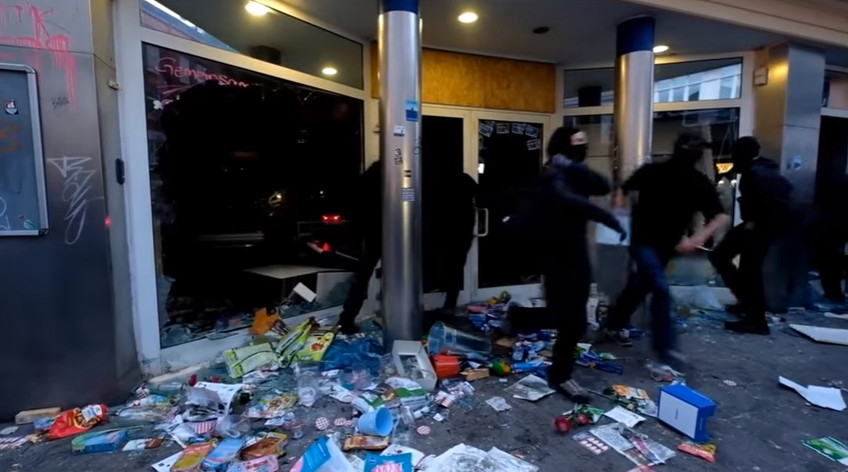 German mother and little blonde daughter wend their way through the gigantic mess. 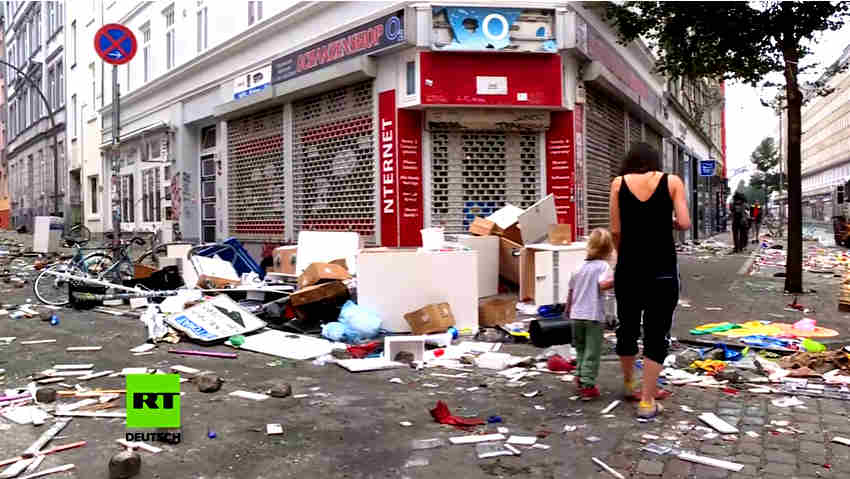 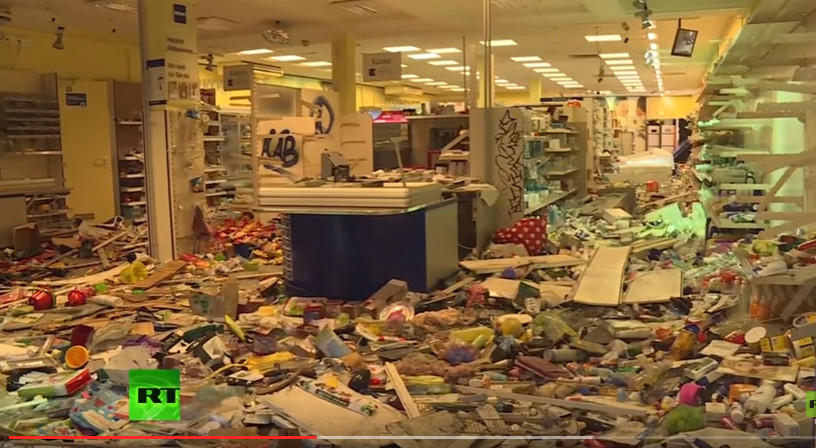 Antifa run like rabbits when the police charge, but always return to vandalize, burn, and throw big rocks. In previous years they fired steel ball bearings from high-powered slingshots at the police. 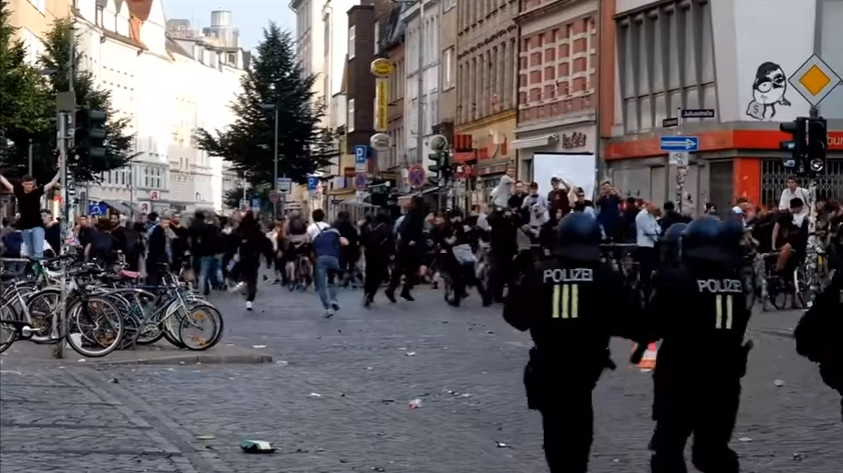 They use masonry hammers to break up the beautiful cobblestones, then break them in half and finally nchuck them at the police. 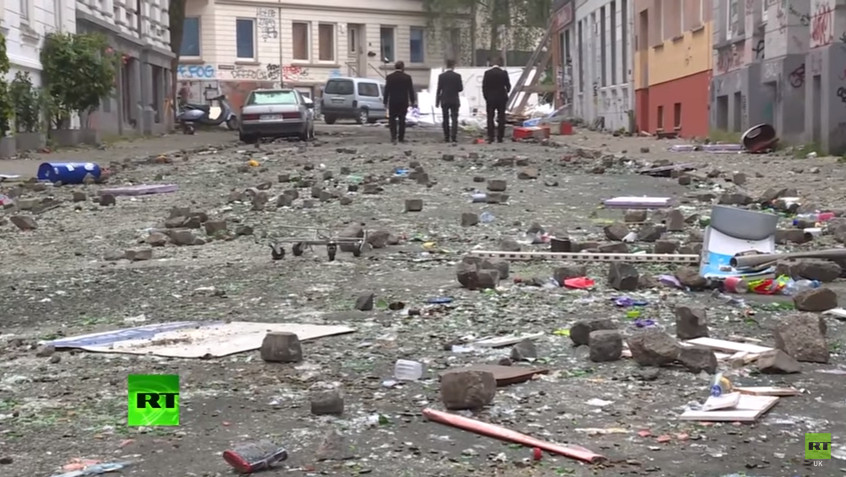 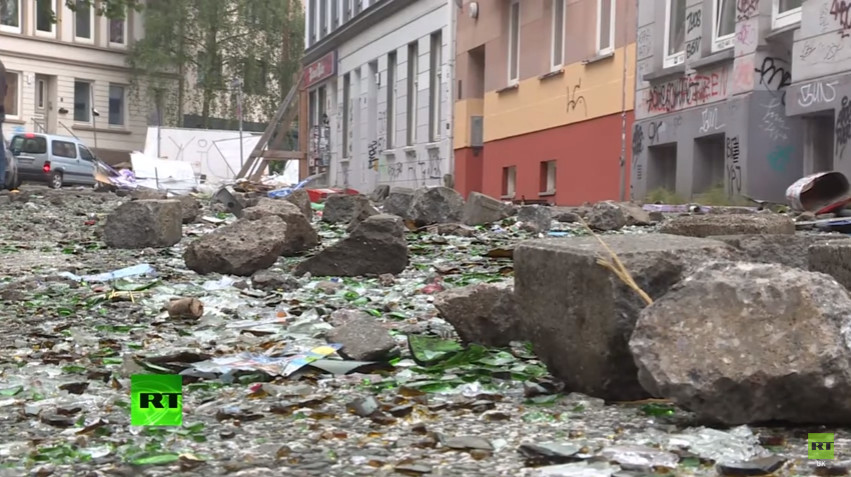 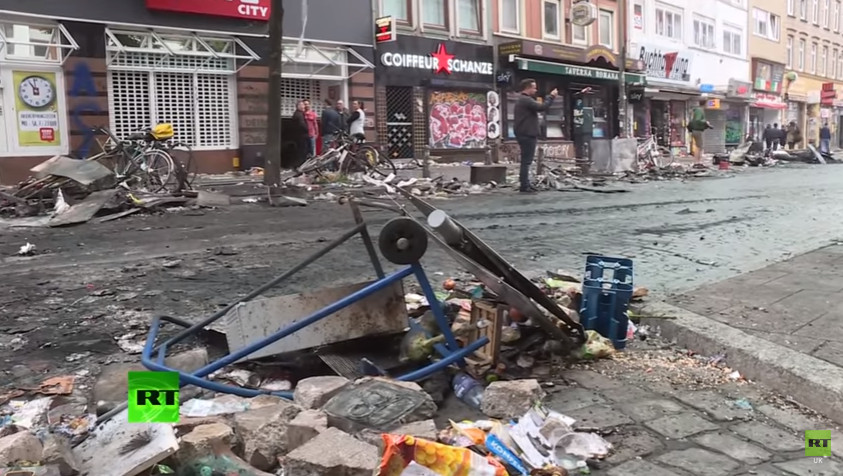 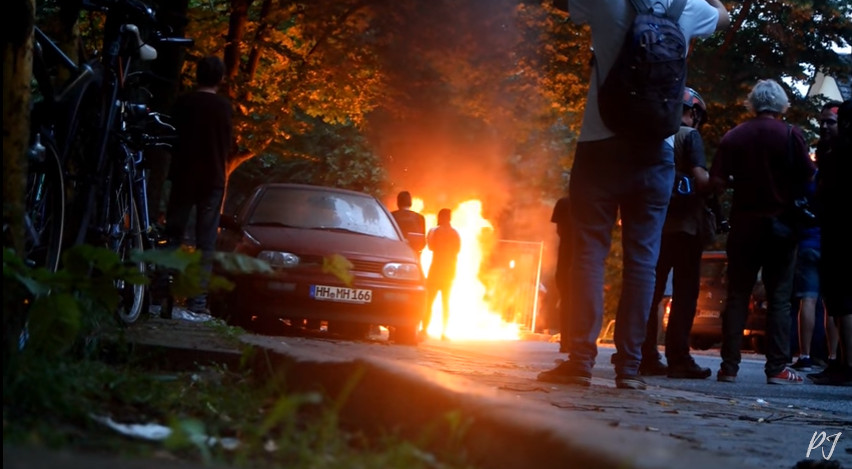 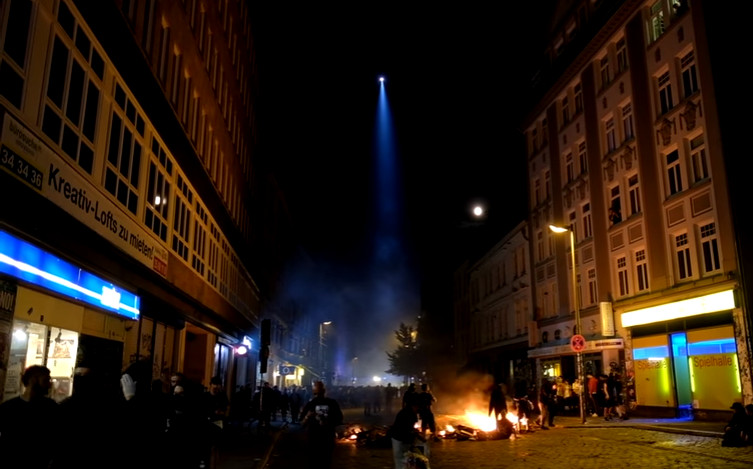 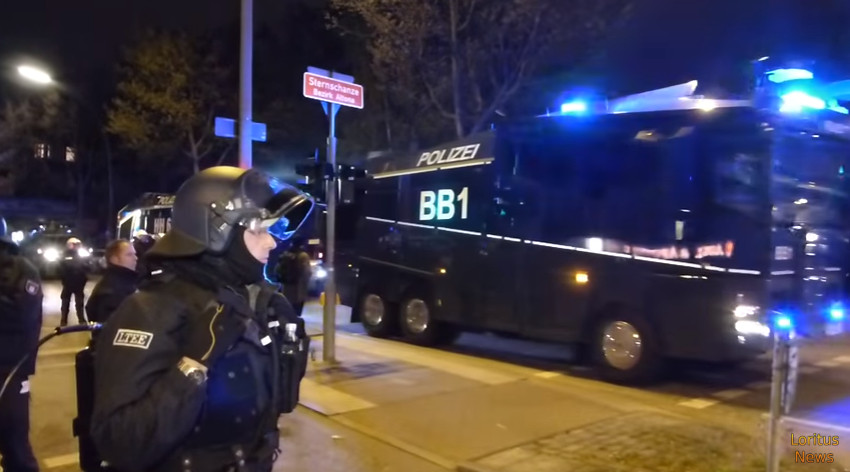 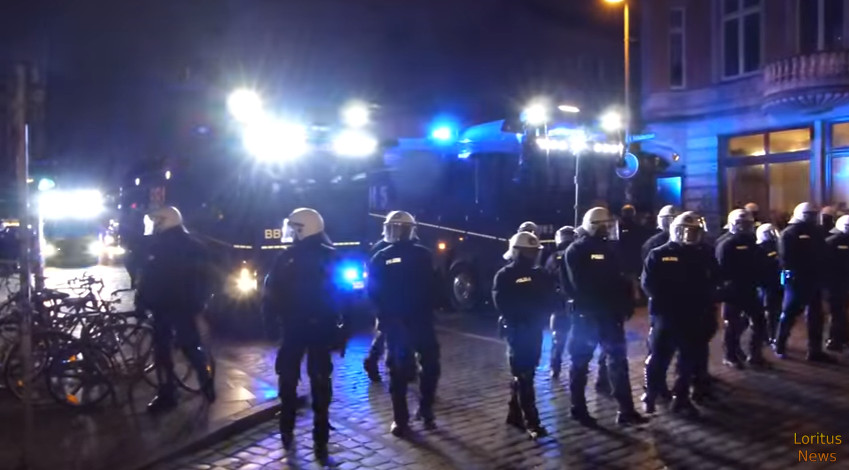 The storming of the hospital last night [by antifa] really took place. 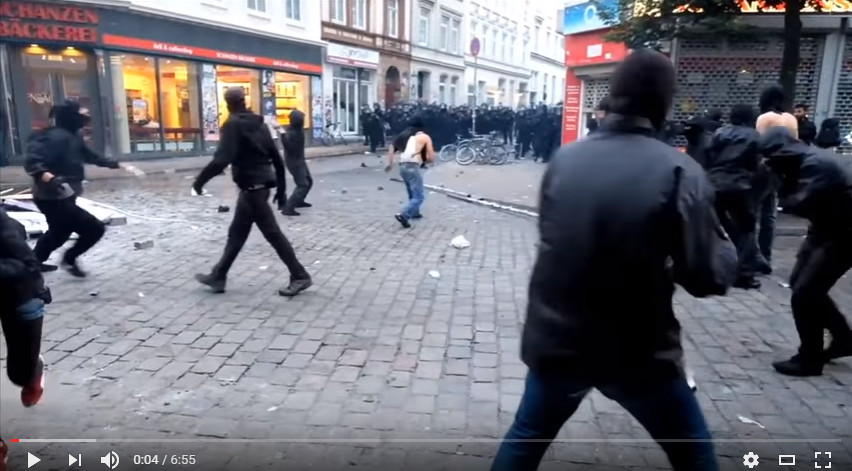 [The authorities] were at the point of declaring a state of emergency, and the Germany military [Bundeswehr] was put on alert.

Why does not the Interior Minister [the Cabinet minister in charge of internal security, Heiko Maass, infamous for ramming through Internet censorship and arresting Germans for “liking” something on Facebook] go before the cameras and speak out? 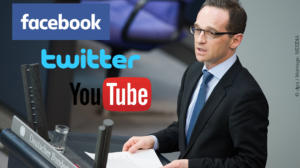 Instead, people from the second rank are interviewed. [Hamburg] Mayor Olaf Scholz, demoted to a speech robot, has not produced any useful statements.

What did the [policeman] finally interject? A final e-mail quote from him:

“I have lost faith in our country, politicians and laws. The state has gone down the drain. “

This article exists because I majored in German at Georgetown and translated it for you, also adding photos I created from screenshots. If I taught you something, please do the right thing. It costs me $500 a month for this website, two webmasters, constant high-level anti-virus protection, backups and a mirror site.

Email today from an antifa:

From: Bill Blatt <Gloucesteraa@mail.com>
Subject: You
Message Body:
Hey Nugent you disgusting puke. No wonder your daughters won’t speak with you. Join the Marxist revolution like everyone else. We are taking media and schools, just waiting to topple the capitalist superstructure.
.
.
(I replied)
.

The infamous Wall Street arch-capitalist and Jew George Soros is funding and running you — to wipe out whites. 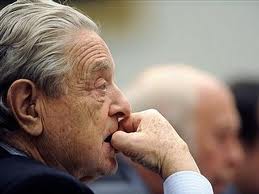 –9 July 2017 donation from C in Maryland via Stripe

–5 July 2017 donation via PayPal from J in Australia