Not only is left wing cretin, Andy Murray, an Anglo-phobic supporter of Nicola Sturgeon’s SNP, as well as a proponent of their relentless pursuit of Scottish independence, he’s become so infected with Leftist-Sepsis – a condition afflicting the vast majority of Britain’s indigenous youth these days – he’s threatening to boycott the Aussie Open.

Their refusal to distance the event from a courageous Aussie tennis great who publicly opposes gay marriage.

The idiocy arose in the wake of controversial comments published in a Sydney newspaper from Margaret Court, a 24-time grand slam singles champion turned Christian pastor, who has long respectfully voiced her opposition to the unholy union.

“I don’t see why anyone has a problem with two people who love each other getting married,” Murray said. “If it’s two men, two women, that’s great. I don’t see why it should matter. Everyone should have the same rights. Homophobia is not on, in Australia or anywhere else…Until the name of the stadium is changed (from Margaret Court Stadium) to something else, I think it’s fair to say that a boycott of the Open may be in order.”

Give it a rest Murray. People shouldn’t be bullied into accepting a perversion of marital law simply because it’s in vogue. Margaret Court is entitled to her beliefs and I for one am invigorated by her courage to express them!

I first suspected that Murray was a leftist nut-job when I heard that his relatively attractive girlfriend*, who’s since married the tennis star, was cross with him for spending too much of his downtime playing with his Playstation, rather than with her!

I can imagine many a male SNP supporters prefers video games to sleeping with women. (As well as the company of other men in kilts I presume.)

And how, you ask, has Margaret Court handled the controversy?

In response to the criticism, the valiant Court said that although the “Gay lobby” was powerful in Australia and would try to subvert tennis as they had Australia’s education system, where like Britain they also apparently “get [into] the minds of children” via “Australia’s Safe Schools anti-bullying program,” she would not be deterred.

Ms Court added that “tennis is overrun with aggressive lesbians” before topping off her bravery by claiming that “transgendered children are the work of the devil.”

Margaret Court is a bloody hero in our estimation, who unlike most of the anonymous keyboard commandos in our cause, is as courageous as they come.  Perhaps we can invite her to Britain to defend our kids from the grooming gangs. It’s not as if anyone else over here’s going to do anything about it.

Murray’s wife, Kim Sears, had no problem ‘racially’ abusing the stunning girlfriend of Czech tennis player Tomas Berdych, referring to the Czech model as a ‘Czech bitch’ on court. Leftist hypocrisy at its finest.   I say we boycott anything the Leftwing c*&t does.

I know I won’t be watching Murray LOSE at this years Wimbledon.

I will however be looking out for more photos of Ms Berdych.

Margaret Court Arena has recently been expanded and upgraded to secondary status at the Australian Open, behind only Rod Laver Arena. It has held its name since 2003, but Stosur said on Monday that “we’ll see who wants to play on Margaret Court Arena and who doesn’t”.

Casey Dellaqua, another idiotic player, who is bringing up two children with her female partner, had earlier sent a tweet saying: “Margaret. Enough is Enough.” And Stosur responded by saying: “I wanted to support my friend and that’s why I sent out my first tweet in a very long time. It’s just not something that I agree with. I think we definitely should have it [same-sex marriage] in Australia.”

Following his first-round win over Andrey Kuznetsov at the French Open, Murray said: “I don’t see why anyone has a problem with two people who love each other getting married.

“If it’s two men, two women, that’s great. I don’t see why it should matter. It’s not anyone else’s business. Everyone, in my opinion, should have the same rights. I don’t agree with that (Court’s stance).”

Asked if he would support a potential boycott, Murray said: “If something was to be done, I think it would be a lot more beneficial to do it before the tournament starts.

“For players to be in a position where you’re in a slam and boycotting playing on the court, I think would potentially cause a lot of issues. 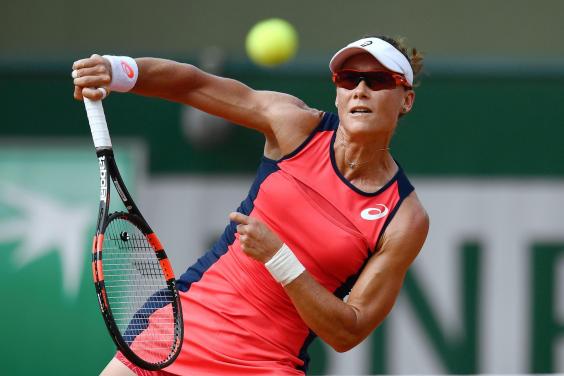 “So I think if something was going to be happen and the players come to an agreement, if they think the name should be changed or whatever, that should be decided before the event starts.

“But I would imagine a lot of the players would be pretty offended. So we’ll see what happens.”

​Stosur is not expecting the name to be changed but does not feel players should sit back and do nothing.

She said: “I find it very hard to believe that it would ever be changed, but the court’s named Margaret Court Arena because of what she did in tennis.

“I think everyone can have their opinion. I don’t agree with it, but I guess we’ll cross that bridge when we all get down to the Australian Open next year and who wants to play on Margaret Court Arena and who doesn’t.”

Stosur’s fellow Australian player Casey Dellacqua has been the loudest voice in opposition to Court.