What a difference a day makes, twenty four little hours.

Lovely lyric from a classic croon tune, however when put into the context of the transformation South Africa’s armed forces have seen since the fall of Apartheid – it’s not so pleasing to the senses.

Just How Much Difference Can 20 Years Make?

By the looks of our Armed forces, a lot.

Life wasn’t perfect under Apartheid, and I myself was a proponent of change.

As an Anglo-South African I too was discriminated against under the Apartheid government in spite of the fact I am 100% white – but that’s a story that will have to wait for another day.

Today I would like to concentrate on the state of the South African National Defense Force (SANDF)  and compare it to how things were twenty short years ago.

By merely looking at a few photos one quickly realizes a lot has changed over the years. 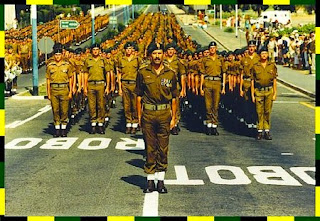 Before the 1994 election, South Africa had to defend her borders from communist, guerrilla warfare-often referred to as Border Wars.

I spite of trade sanctions which cut us off from the outside world our government didn’t roll over and play dead – instead we began manufacturing our own weapons.

Our army was magnificent and apart from our Springboks (rugby team), the pride and joy of the country. The army was well organized, disciplined and dependable.

Our cadets were well trained, receiving the right dose of discipline. Although we were victimised as a people our army stood strong, mirroring our national spirit. 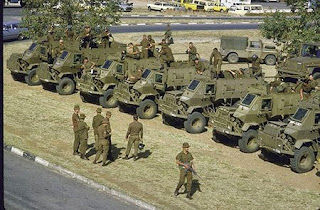 During the years of border conflicts, the South African soldiers diligently served their country, their family and friends. Although many youngsters lost their lives in the bloody battles they will, always be remembered as heroes. This is often why so many of us have such  a hard time accepting Marxists for anything more than the murderous villains they are.

This loathing was instilled in us, and remains as potent as ever.

But can decades be seen as short when Marxists rule the roost?

By the looks of our comical undisciplined army, I’d say not. 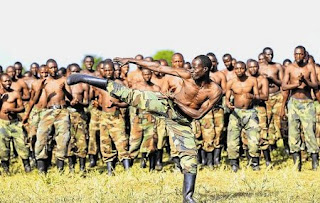 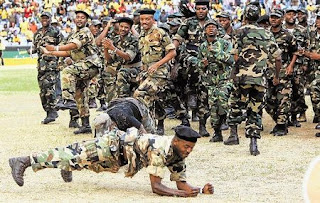 New SANDF techniques. Less emphasis on physical training-more on break dancing – after all we do have a dancing president. I often wonder what on earth would happen if we were attacked! Will the dancing soldiers manage to protect us?

Rolling out the Red Carpet for Michele Obama
With that said, I still think we have the heads up on the American trained Iraqi army 😉 Enjoy the video.