…..THE SICKENING EFFECT OF BETRAYAL

In the 1990s movie “Braveheart” the most awful scene is when William Wallace (played by Mel Gibson) finds out that Robert the Bruce, who seeks the throne of Scotland, a man for whom he has fought desperately and heroically with thousands of his men,� risking their lives for Scottish freedom and to make their Robert the Bruce the king, this very man has nowbetrayed him, his most loyal follower, to the English.

It was part of a “deal” with Edward Longshanks.

Wallace (played by Mel Gibson) is literally floored ( and I mean literally literally ;-)) by this black and incomprehensible betrayal of his� devotion and the sacrifice of the lives of his men. How could this be traded away for the Bruce’s short-term personal advantage?

Later in the film the Bruce bitterly regrets stabbing Wallace in the back — and vows to no longer listen to his disgusting father (played by Burgess Meredith) who had counseled the deal with Longshanks.

A white former South Africa has been keeping me informed as to how White South Africa fell in 1994, and this is yet another of many blogs I have done on this topic. I have often written to praise Hendrik Verwoerd, the great leader of apartheid South Africa…and its prime minister from 1958 to 1966. http://johndenugent.us/?s=verwoerd The man had heart (he adopted German orphans after WWII), he had brains, vision and sturdy character — you name it.

So the Jews had him assassinated. IF YOU HAVE NO wise and brave LEADER, then EVERYTHING eventually COLLAPSES.

South Africa had law and order, a booming economy, a huge and invincible military, and thetrue apartheid economic plan was being implemented: give the black tribes their own countries so the Whites can live separately!

It was never about a white ruling class, Confederacy-style, and black masses under them! It was about RACIAL SEPARATION! Separate nations for Whites and Blacks!

The South African military that Verwoerd built up kicked black butt everywhere it went, and even developed atomic weapons! Here is the thrilling story of the Cassinga operation in 1978:

READ IT TO SEE WHAT THE WHITE MAN CAN DO — NO MATTER HOW OUTNUMBERED OR WHAT MODERN WEAPONS HIS ENEMY HAS.

A great salute in song by Bok van Blerk to the white “Border War” soldiers who risked their lives to successfully crush the black communist terrorists over and over and over again, and kept at it heroically, and without flagging, for 25 years

But one of the other big lessons of the fall of white South Africa IS THIS:

NEVER TRUST YOUR OWN WHITE MILITARY GENERALS! THEY WERE BRAVE ONCE ON THE BATTLEFIELD BUT BRIBE-TAKING SELLOUTS NOW IN THE BOARDROOM AND COUNTRY CLUB!

The true WN political leader Jaap Marais (of the HNP, the “Restored National Party”) put out this warning flyer about traitorous Afrikaner generals

(my translation from Afrikaans — top half):

Tienie Groenewald [a former general and head of military intelligence]

Scheming behind the scenes

J.A. Marais, leader of the HNP of SA

And how right Marais was! DO NOT TRUST THE GENERALS!

A poster for Jaap Marais, a great hero: http://en.wikipedia.org/wiki/Jaap_Marais

for the White Man

Marais speaking (right at the beginning, in Afrikaans, a kind of Dutch-Low German language)

(The third speaker, the fiery and burly Eugene Terre’blanche, was murdered by his own black employees, farm workers, in 2010, who then pulled down his pants after they had slashed his throat while he slept, and claimed he had tried to rape them! … This is the the homosexual defamation that psychopaths always use, and suckers always believe.)

The sheeple voted for the “National Party” (similar to the fake-conservative Republicans in the US, or the Tories in Britain or Canada) and drooled as it sold them down the river. A few joined the “Conservative Party” but that also sold them out. The HNP, which told the truth, the whole truth, and nothing but the truth, never got off the ground. I cannot think of a better indictment of the myth of democracy than how the South African white sheeple voted for their own destruction by rejecting Marais, whom everybody knew and whose message was clearly understood:

Do not trust the Establishment conservatives and generals. THEY HAVE ALL BEEN “TURNED.”

But they did, sheeple being sheeple, whatever their race, and this is the result:http://johndenugent.us/solutreanism/race/white-south-african-tragedy

In this semi-comedy video, the first race traitor shown is the Hollywood star and South African (Afrikaner) woman Charlize Theron, here with her “black baby”….

Since Jaap Marais was of French Huguenot descent, like Terre’Blanche and many other good Afrikaners, I will add what the French WN Marcel Jouhandeau said in 1972 before he died:

It is just a question of time — and of Jews or not. Remember to defend yourselves by every means against those seeking to destroy you by their exacerbated racism and to live out their demoniacal dream of world domination. And especially do not forget this: their power exists only through our own

And now here is the proof that ALL WHITES must look at themselves!

Two Afrikaner generals (Meiring and Viljoen) who headed the South African military and handed power over smoothly to the blacks JUST AS MARAIS HAD WARNED; black soldiers cold-bloodedly murder two white militants who fought the black takeover and then� climbed out of their Mercedes, lay flat on the ground, and naively surrendered. Why hand yourself over to your blood enemy? HEROISM MEANS A WILLINGNESS TO FIGHT TO THE DEATH, YOU FOOLS!!! YOU CANNOT EXPECT MERCY!!!

General Georg Meiring, distinguished-looking traitor who caused the murder of 54,000 Afrikaners after the black takeover. Why is this POS still among us? Nobody willing to do the job? WHERE IS THE HEROIC WILL TO SACRIFICE YOURSELF FOR JUSTICE?

General Viljoen and an Establishment politician sign the surrender of white power to a black communist in the top photo. In the bottom photo, the last white president of South Africa, F.W. de Klerk, quite literally is playing golf as his people’s future is signed away. (He got millions and a Nobel Peace prize for his nauseating treason.)

In this passage, General Meiring makes it clear to Afrikaner patriots he will order them shot if they resist the black takeover, and even threatens (as an Afrikaner, no less) that he will use his “English regiments” to crush them. (The white Brits and Afrikaners have long had a tense relationship.) I cannot find the words to describe a steaming human turd who is willing to order one group of Whites to attack another so blacks can take over and kill them all……………

LOOK AT THESE PHOTOS BELOW, MEIRING! YOU DID THIS!

THE BLOOD OF THE INNOCENT, KILLED BY ANC BLACKS, CURSES YOUR SOUL TO HELL! 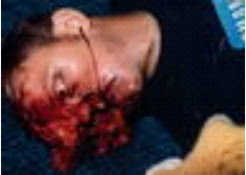 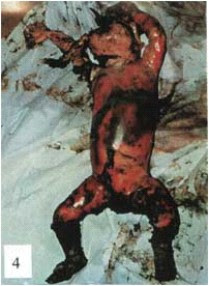 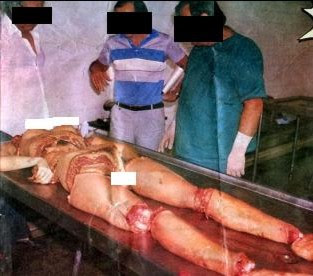 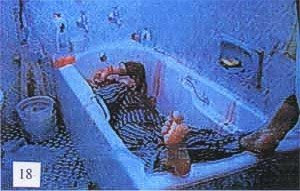 The lucky ones are only starving to death, like Sarie Roussow in the Eagle’s Nest Squatter camp outside Johannesburg.

DEATH TO TRAITORS, DO-NOTHINGS AND COWARDS

Are you in one of these categories?

Thank You for having the guts to print this. My Mother was Danish, and I say send all traitors back to Valhalla and let Odin be their judge.

Sent in by a former SA military man:

flecha.co.uk … by a veteran of 32-battalion. Our country was a country of many contradictions – sold as anti-black. But look at our SA Army’s 32-battalion., It was a primarily black unit, with white leaders (officers and NCOs). We had the Bushmen battalion, Koevoet – the police unit – with plenty of blacks, all who took up arms against the communists, many of them being refugees out of Angola and elsewhere.

See what happened to the black veterans of 32 Battalion… it is a crying shame. In case South Africa had won, would they have become the leaders of their people in their own independent homeland? They certainly deserved better – and that say I as a white man. These black veterans, reintegrated into the ANC-brainwashed black masses in South Africa, were sent straight into the jaws of the shark. Horrible.

The way I remember it, in the early 1980s the Defence Force was primarily white, with some highly effective black units, of which we only heard after the end of the Border War when the so-called “Border War literature” started appearing.

With political leanings changing to the left, it became more and more integrated, most probably to get us used to the idea of racial integration.

Rhodesia also had lots of black units under white leadership. I have the fine feeling that, taking away the technological superiority of the Western armies at the time, on a man-to-man level the Rhodesians and we South Africans (especially the specialized units) would have beaten) any Western army of the time. But that remains speculation, for at the time we did not think of competing against other armies, just of surviving and doing our duty. We did not know we were special. At the same time the Afghanis were fighting with the very Soviets – now those were soldiers of a completely different kind.

Please have a look at the youtube links, in order to ensure that they are family-friendly enough. I have become somehow deadened to some scenes of violence, but I know that many viewers are very sensitive. I salute you, ex-Rhodesians — you where the best! Not to forget the Portuguese before that, but they were of a much older generation.

For example this is not family-friendly, John:

This seven-part documentary shows how we experienced it apart from all the propaganda in the world against us. This was the reality for us – long periods of no event, then sudden contacts, and slowly building up to a major conventional battle at the Lomba River (sometimes called the Battle at Cuito Cuenevale), where it all ended.

I missed the battle at Cuito,for the army exemption board gave me time off for my studies. But I remember sitting in front of the evening news on TV with my parents, looking with trepidation at the development over there, and wondering when will my brown envelope (my call-up papers) arrive in the mail box, since I already was fully battle-trained.

Cuito Cuanavale (some scenes have been cut and pasted from training exercises, though other seem to be genuine):

Some idea of the fighting taking place in very real, conventional warfare, perhaps even on a bigger scale than the [Mel Gibson] movie “We were Soldiers.” This was real serious business. You must see the arms buildup we saw arriving from the Eastern Bloc. It was something unreal and scary and out of this world, something to turn’s ones hearts into ice, especially for us young recruits, all while we [our South African economy] was being sanctioned [boycotted] all over the place. That meant Big Business. It somehow reminds me of the buildup on the Eastern Front in Germany in 1941, but with modern weapons unknown at that time. Our front also stretched over hundreds of kilometers.

This American had been ‘there’ (on the border):

…and these also (I believe they returned back in the USA, but I may be wrong):

As I understand, going by comments of the web from some of your ex-Vietnam veterans, they also felt they were winning, but were sold out in the end. Welcome to the club. But then again, Vietnam and the Cold War would not even have been necessary had Fate not have decided against another great nation before all this, but then that is a completely different story.